Creators
Carroll Herman Little, Correspondent
Candace Little
, Recipient
Media Type
Text
Item Type
Correspondence
Description
Handwritten letter from Carroll Herman Little to his mother on November 18, 1921. Little discusses family life with wife Bonnie and their children; his work as a Lutheran pastor and faculty member at the Evangelical Lutheran Seminary of Canada in Waterloo, Ontario; the health of Marion and Ruth; making wine; a letter received from Bonnie's sister Meda DeLong; and birthday wishes for his mother.
Notes
-- Paper is watermarked: PROGRESS BOND
MADE IN CANADA

It is getting about time for your birth-day again. I wish I had something nice to send you, but in lieu of that I will write you a letter to-night which I hope will reach you by the 21st. This will be, I think, your 74th birth-day and I hope it will find you still in vigour and in health and in the enjoyment of our Lord’s richest blessings. You have ever been a good mother to us all, and especially to me, and I cannot tell you how much I appreciate all your are to me and all you have done for me. Allow me to wish you many more happy returns of your natal day.

To-morrow I am going to Brantford to preach. I will leave here about 7 o’clock in the morning and expect to get back at about 11 to-morrow night. So for once I will not be away over night. I have no other preaching appointments booked and would be just as well pleased if I could have a few Sundays rest. It is rather hard to teach all week and then preach twice a Sunday. I never feel tired on Sunday, but on Monday I am pretty well played out and don’t have much vim for teaching. However I recover quite rapidly and generally feel all right by Tuesday. The remuneration that I receive however, comes in good and I could hardly get along without it. Last week I had to take Marion down to the oculist and get glasses for her. The nurse in the public school gave her a simple eye-test and discovered that the sight of her left eye was defective. The oculist said it had never developed properly. It gave her a tendency to cross her eyes at times. I am in hopes that the glasses will inprove her bad eye. She has dark rimmed tortoise shell glasses and bows. They don’t look too bad on her. The glasses cost me $8.00. Marion is otherwise in pretty good health. She seems to be about over her catarrh and rarely coughs any more unless she takes a cold. She

is getting along nicely at school. Little Ruth was sick several days this week, ran a high temperature and was very sick – all from cutting several back teeth. She didn’t feel at all like herself until to-day when she was able to run around again. We didn’t have the doctor but I got some tablets from him to reduce her temperature. She was a very patient little girl and didn’t give much trouble, although she liked to be held a great deal. I think she will be O.K. from this out.

I am enclosing a couple snaps that Carolus took some time ago – I don’t think you have seen any of these yet. Yesterday I saw in the paper that wine-grapes were selling at 3₵ a pound, and I thought it was too good a chance to miss. So I ordered 100 lbs. and made about 10 gallons more wine to-day. I also have some beer in the making. So with my barrel of cider I ought to be pretty well fixed for the present dry season. Coal is again pretty scarce, but I have enough on hand to last 3 or 4 weeks yet and hope that by the end of that time I will be able to get some more. Bonnie had a letter from Meda yesterday. She said that that they had actually had Mrs. I.B. in Mt. Hope Asylum for a time, but that now she was in the General Hospital. Meda thinks she is getting just what she deserved and said that she had no doubt that she dictated the whole will, that it was not like her father to cut off the children as he did and give it all to his wife and her sister (Don’s wife). She said when she was at home a few days before her father died that she wasn’t given an opportunity once to be with her father alone. Naturally she feels quite cut up about it that out of an estate of $50000 she got only $500. With Mrs. I.B. in the mental state she is she could not make a will even if she wanted to and the property will go to the Masons – three sisters, only one of which is a DeLong. The weather continues wonderfully mild for the time of year. To-day it has been rainy. Our Post Master Mr. Diebel committed suicide on Tuesday morning by hanging himself in the Post Office. He was one of the most highly respected men in the town and was 72 years of age. No reason is known for the deed, but he had a couple sisters and one brother to commit suicide and his mother died in the asylum, also they say from suicide. Mr. Diebel was worth upward of $100,000. So it was not financial matters that bothered him. He had no children living. Well I must close for this time. With all good wishes for your birthday and all the future days. I am 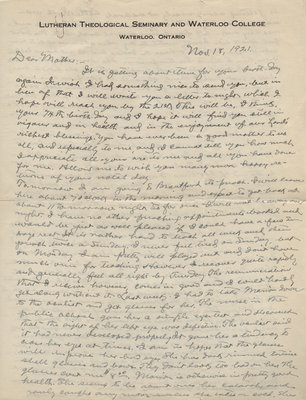