Creators
Carroll Herman Little, Correspondent
Candace Little
, Recipient
Media Type
Text
Item Type
Correspondence
Description
Handwritten letter from Carroll Herman Little to his mother on October 14, 1921. Little discusses family life with wife Bonnie and their children; his work as a Lutheran pastor and faculty member at the Evangelical Lutheran Seminary of Canada in Waterloo, Ontario; the coal shortage and rations; making wine and cider; attending a convention in Buffalo, New York; and changes at the Seminary.
Notes
-- Paper is watermarked with the following: PROGRESS BOND
MADE IN CANADA

As I am home to-night and it will be late when I get back from Brantford to-morrow night, I have concluded to give you a few lines between this and bed time. We are having pretty nice weather again compared with the stormy weather of last week although it is pretty cool and coal is scarce. In fact none has come into town as yet though they are expecting its arrival every day. However I discovered that I had about half a ton in the cellar left over from last winter and have so far been able to keep quite comfortable. We have a fuel controller and our coal rationed out in ton lots, only there has been none to ration as yet. However I went down Monday and got a permit for coal and paid for one ton. Under the regulations the coal must be paid for in advance. As I came in among the first with my order I will probably get some of the first coal that comes in. I only hope that this will last till my turn comes again. The situation is worse now than it was in war time.

I am not sure yet of going to Buffalo. It depends upon whether I get paid for my preaching at First English during August. They haven’t paid me a cent as yet and if it doesn’t come before Tuesday I will not be able to go, as I haven’t enough money. I have been making a little extra by preaching every Sunday, but don’t save much after all expenses are paid and have easily been able to dispose of the balance without being chargeable with extravagance. Dr. Maurer assured me that they would pay me before I would start off for Buffalo but nothing has been done so far and the time is only a few days off now. Dr. Hoffmann is going on Tuesday, also Prof. Zinck and Prof. Henkel. We decided to close the Seminary from Tuesday noon until the following Tuesday morning. Most

of our Seminary students will go over as they have been provided with free entertainment. Pastor Bermon has secured a place for me also with a sister of one of our Seminary students who comes from his congregation. I will have to leave here about 7 o’clock to-morrow morning in order to catch the radial for Brantford in time for service to-morrow morning. This will mean early rising for Sunday. The new professor, Rev. Crawford, arrived on Monday of this week and immediately entered upon his work. He is a fine classical scholar and a quiet unassuming man and is getting along fine, likes it here and is well liked. He is an MA. of Toronto University and an honour graduate in the classics. He looks to be about sixty though perhaps is not quite so old as that. His coming released Prof. Zinck for Seminary work except that he retains the higher Mathematics for this year. We separated the two faculties and re arranged our Seminary work and made it easier for us all around. My periods are reduced now to 15 per week and my Seminary subjects are restricted practically to Dogmatics and N.T. Exegesis. This will enable me to do better and more thorough work in my department. I intend to introduce in part at least a different method and do more in the way of lecturing. I still retain three religious subjects in the College and have taken over Apologetics for the year. Our student from Winnipeg Mr. George Innes will be back the last of this month. He will make the 12th student in the Seminary, which is the largest number in our history. The largest number we had before was eleven.

Carolus is attending catechetical class in St. John’s preparatory to confirmation next spring. He is studying hard and taking great interest in the work. I think he will be one of the brightest in the class of thirty odd.

Carolus and Herman were both working to-day for near-by farmers picking up potatoes. Carolus earned 90₵ and Herman 50₵, of which they have so far spent about half.

All the children are getting along nicely in school and seem to enjoy going to school. Eileen can hardly wait till her turn comes. In the meantime she enjoys going to Sunday School and has never missed since she

started except when she had her collarbone broken. The children pay 5₵ a Sunday Collection. Carolus had been dividing his 3₵ for current expenses and 2₵ for missions; but when some time ago they said they wouldn’t give the Young Folks any more to any except those subscribing for it, he told them to change his collection to 4₵ for missions and 1₵ for current expenses. That was upon his own initiative.

Little Ruth is as active as any of the children now and is almost as little trouble as any. She is very good natured and she and Eileen have great times playing together. She can say a good many things and when you tell her to do anything she always says “all right.” She is still very small but as bright as a button. She has been using her nursery chair regularly since she was about a year old and hardly ever has an accident.

I made my wine yesterday. I have between six and eight gallons of it I think and I believe it is going to be extra good. The grapes cost me 5₵ a lb. I also bought a barrel of cider, 25 gallons at 20₵ a gal. When I get it doctored up I ought to have sufficient drinks to last me till spring. I haven’t made any beer lately. It requires an even temperature and I thought I wouldn’t undertake it till I had a steady fire in the furnace.

I had a good turn out in Hamilton Sunday night. I left right after Church and reached home about a quarter after 12 o’clock coming all the way by Radial. Our boys played the Kitchener-Waterloo Collegiate Thursday and beat them again 11 to 6. This was one point better than the last game they had with them. Well, I must close and put Ruth to sleep. With love to you all and best wishes, I am 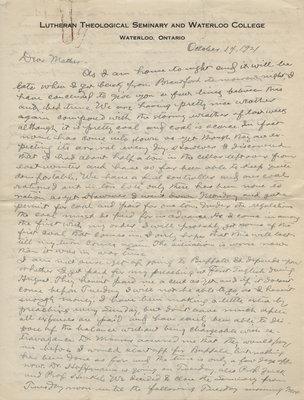