Here I am again with nothing to write about and yet with the duty to discharge of spinning out two or three pages of small talk to you. Bonnie and the boys are at Church as usual at this time and the smaller folk are all in bed and “everything is quiet along the Potomac.” Carolus, Arthur and I were down on the lake in the Park skating for an hour or so before supper. Carolus told his mother that he would lend her his skating shoes and insisted that she should go next Sunday. To him she excused herself by saying that his shoes were too broad for her slender feet, but to me she said she would cut quite a figure on the ice! He has been after her nearly all winter to go skating or toboganning and can’t understand why she shouldn’t go some times, while to her the very idea seems ridiculous, absurd in the extreme! Marion is making progress in reading her Bible. I guess she is pretty nearly through Genesis now. She was quite struck with the “joke,” as she called it, of Jacob’s catching hold of Esaw’s heel and trying to pull him back. She must have told her teacher about it, for she said the other day that the teacher said it wasn’t true that Jacob came out of Rebecca’s ribs. She asked me about it, and I said that the teacher was right about it and she retorted, “Well, he came out of her somewhere because the Bible said he did” – a fact which I couldn’t deny. Arthur estimates every boy according to whether he can fight him or not. He is in the bully stage now and isn’t afraid to tackle

any fellow any where approaching his size that comes around. He had great sport with a little Lang boy on the ice this afternoon and had him down a couple of times.

I had a nice long letter from Blanche last week. She seems to be well satisfied. with her quarters and surroundings and gave me a good description of her place with its pecan and fruit trees etc and of the climate and the sunshine in the far south. She said, however, that Mr. Pegram was bent on buying a place in the Sand Hills of North Carolina, which, in his letter of recent date, he already calls home. I think if she is wise she will remain where she is now that she is in Florida – on the principle that ‘a rolling stone gathers no moss,’ and ‘let bad enough alone.’ Mr. Pegram has tried out the sand hills before and should be satisfied with the disastrous results, but it seems he isn’t even as wise as the burnt child which dreads the fire. Blanche ought to know him well enough by this time to put no dependence in his dreams of wealth and everlasting chasing of rainbows, and should sit down good and hard on his projects for the betterment of his financial condition. He is afflicted with chronic failure in its fatal form and Blanche might as well despair first as last of the incurable nature of his disease. But she puts up a bold front in her letter. She said further that Olive had just arrived, but didn’t say whether this was a good fortune or the reverse. However, the whole tone of her letter was optimistic. Perhaps she has caught a little of the spirit of her worthy husband. A little optimism is a tonic and is all right. I am myself, I hope, sanely optimistic. But too much optimism is intoxication and is as bad as downright drunkenness, which in the eyes of our prohibition age is the most heinous of all crimes. But enough on this subject. I have no patience to pursue it further.

I haven’t written Leopold yet congratulating him over his baby, though I may get around to it to-night.

I confidently expect our own a month earlier than Bonnie calculated and have about brought her around to my opinion. We will have the same nurse we had last time, Mrs. Good who hails from Nova Scotia. Bonnie has also written to Miss Blunck, and if she comes we will have the same combination as before. I feel positively sure this time that the baby will be a boy and don’t think I can be mistaken about it. But of this time will tell. Bonnie has told Meda about it, but did not say anything to any of them at her home. I suppose we will hear pretty soon from Herbert and Bessie unless they went wild on their calculations. I was down town and over to Kitchener yesterday and bought yards and yards of flannelette – got it at 20 and 25₵ a yard. This will keep Bonnie in sewing for awhile. She already has dresses made up and hopes to have every thing in readiness by the middle of April.

The winter continues very mild and so far we have had very little snow. The ground is apparent everywhere except in white patches here and there. The work in the Seminary and College is progressing nicely and running smoothly. I have a good deal of studying and writing to do in getting up my lectures but enjoy the work and am holding up well under it. Prof. Slanker’s wife returned yesterday. So he will be with us the remainder of the year and they will probably not go home even for Easter. Well, I have spun out my three pages and will close. With much love to yourself and all the rest, I am 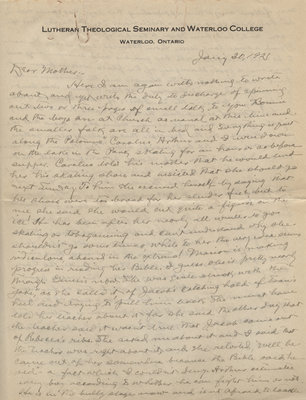