Your very newsy and interesting letter to Bonnie was received last week and was read with pleasure. As it will probably be some time before Bonnie gets around to writing you will kindly consider this as an attempt to answer it. We are having a very stormy night to night – heavy wind, cold and driving snow. It was too stormy for Bonnie and the boys to venture out to Church to-night. So we all stayed home where we have it comfortable and warm and whiled away the time playing crokinole. Bonnie and I played three games of which she won two, thus wresting the championship of the house from me. The boys are playing now with one of the neighbours' boys who has come in for the evening, but I can’t tell you how they are making out. The storm this afternoon and to-night was the heaviest we have had this winter, and I suppose there will be some snowshoveling to do on the side-walks to-morrow morning. We have had very little snow this winter barring the time between Christmas and New Year, but generally enough snow to keep the ground white. Yesterday was the first time the Seminary boys succeeded in getting their rink so it could be used. Carolus and Herman and Marion and Arthur and I were on it for an hour or so last evening. It was rather rough but still “not too bad” as the Nova Scotians say and we enjoyed the sport. Carolus and Herman were over a little while this afternoon but found the weather too rough and

soon returned. Marion and Robert went down to the Park to skate Friday afternoon, but soon returned. Robert explained that they saw a sign up that if they stayed in the Park they would be ‘prosecuted’ and said “We hurried home as fast as we could.” I don’t know what idea he attached to prosecution but am sure he thought it was something awful and that it wouldn’t be safe to stay down there. It was Marion, of course, that read the sign. She started to read the Bible through to-day and read the first 17 chapters of Genesis. It is wonderful how she can get over the difficult proper names. Herman has also started to read his Bible through but isn’t as far along as Marion. He and Carolus, however, memorize a Psalm or other selection every Sunday. I require this of them before I allow them to go out for play. I hope to stock them with a considerable body of Scripture passages before they are grown which will be useful to them in all after life. One of the Seminary students asked me last week what method I had of memorizing Scripture. I told him I had no method at all except keeping everlastingly at it and that I had the advantage of a good start in my youth. In the Public Schools here an innovation has been made in the employment of a nurse who comes nearly every day and inspects the children as to cleanliness, health etc. It has had a wonderful effect on our boys. Before they were somewhat carless as to their appearance and gave themselves little concern as to whether they were immaculately clean or not. But since the nurses appearance on the scene they scrub for dear life, clean their finger nails, comb and part their hair till I’m afraid they are going to be dandies before their time. I shall be looking for them to fall in love if this thing keeps up very long. I think the school nurse is a rather good institution. For one thing she has rid the school of lice and for another she will probably

be able to detect any incipient outbreak of contagious diseases which is a consideration in view of the fact that small pox is still hanging around and that scarlet fever and other diseases are not altogether absent from the twin cities. I had a nice little note from Pastor Murray last week and enclosed a beautiful handpainted blotter folder as a sort of belated New Year acknowledgement. He didn’t say, however, how he was getting along at Verona but no doubt is doing very well there. I wrote a letter to Blanche yesterday and addressed it to Lake City, Fla. I don’t know whether that was sufficient address or not, but thought I would risk it. I didn’t say any thing about the information you imparted nor did I mention Mr. Pegram’s name. He seems to be a regular Micawber, always waiting for something to turn up, and if you will pardon the expression a d. fool optimist. I don’t see how Blanche can have any respect for him, much less love. Prof. Slanker is back at his work and has agreed to stay until the end of the year, which relieves our situation considerably. Whether he is going to bring his wife back or not I do not know, but I hardly think so. Mr. Jacobi one of our Seniors has accepted the call to the Conquerall Parish in Nova Scotia and will succeed Pastor Wahl. This will give us four men from Waterloo Seminary in Nova Scotia. We will soon be in the majority down in the Nova Scotia Synod. Bonnie has had a pretty bad cold for the past week or so and coughs a good deal but is getting better. Dr. Maurer was around the other evening. He says there is every prospect of marrying his whole family off by next summer. Mrs. Maurer’s daughter Elinor is engaged, also Ruth Maurer. Carl is to be married in the spring and Mrs. Robrig, Mrs. Maurer’s widowed sister is making eyes at Pastor Bermon. Glad to hear of the success of Bikle, Clarence and Leopold. Best wishes and love to all. 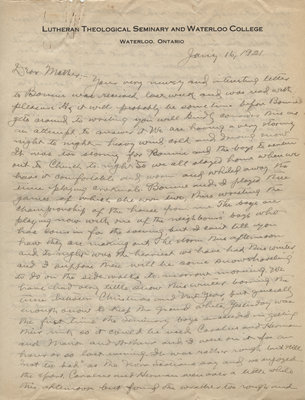