I will try to write you a short letter again to-night, though news is scarce and I haven’t much to write about. We have had and are still having very mild weather since I wrote you last. In fact up to this we have had the mildest winter I have ever experienced in Canada. It regularly freezes a little at night but thaws through the day and there is no snow except small patches here and there. The Seminary and College boys have been waiting for it to get cold enough to water their rink but are still waiting. There is good skating, however, on the lake in the park. This afternoon after Sunday School I took the four oldest children with me and we went down for a skate. The ice was fine and it was just cold enough to be invigorating and we stayed down for about an hour and a half and had enjoyable time. There were several hundred people, I suppose, on the lake. In spite of the mild weather there is at least a foot of ice on the lake and it is perfectly safe. Marion is learning to skate pretty well and Arthur is picking it up too quite rapidly and will no doubt be a good skater before the winter is over. Carolus and Herman are cracker-jacks at it and can skate better than I can, though I might beat them on a straight race through being able to take longer strokes. I hope the boys will soon have the Seminary rink in order, as it will be much handier and we can have some hockey games. We had communion in our Church this morning. It was very small, probably not over 30 in all. But that is not unusual at this communion. In

fact the only large communion is the Easter communion when there are about six or seven hundred. I attended the confessional service in English with Bonnie last night. There were only two others present. The communion service was wholly in German. I don’t think Bonnie got much out of the sermon, though it was as clear to me as English and was a fine sermon. Dr. Hoffmann assisted Pastor Bockelmann this morning. We had the dress maker here for three days this past week. She finished a nice cashmere dress for Bonnie and also a dress for Marion. Bonnie looks quite swell in hers. She worked a pattern in it with wool yarn and it is really very pretty. We didn’t have any of the Seminary Seniors back last week, as they are nearly all filling vacancies and wanted to put in to-day yet. So I had a comparatively easy week last week with quite a number of spare periods. They will all be back by to-morrow or Tuesday, however, and then things will move along again with the regularity of clock-work. Prof. Slanker is back and may be persuaded to reconsider his resignation, which I hope he will do. It all depends though upon whether he gets another position for which he has applied. Next year if plans carry successfully we will have four teachers in the College and the Seminary professors will be eliminated from all College work. Since I’ve got my hand into the French I rather like it and find it quite interesting; But at the same time I would rather teach exclusively Seminary subjects, which are more in my line. I don’t know whether I told you last week or not, Pastor Wahl has accepted the call to the Lunenburg parish and the Conquerall Parish has extended a call to student Jacobi of this year’s Senior class. The latter is preaching at Dunbar and will no doubt get a call from that parish but I hope he will go to Nova Scotia. I think it would be more to his own interest and also to ours and the best for the Church in Canada in general. I shall so advise

him when he gets back if he has not already made his decision. I also heard last week that Rev. Nelson is leaving Mahone Bay. I don’t know whether he has a call elsewhere or whether the Mahone people wouldn’t tolerate him any longer. I heard no particulars and wouldn’t be surprised either way. Bonnie and the boys are down at Church to-night. The service to-night is a memorial for a young woman who died recently of diphtheria. She had been married less than a year which makes it a rather sad case. There are a great many placards on the houses of Kitchener and Waterloo, but mainly for small pox and scarlet fever. I forgot to tell you last week that I finished my Bible readings successfully at the end of the year. I have kept record of the O.T. since 1914 and of the N.T. since 1915. In that time I have read the O.T. through 8 times and the N.T. 45 times Besides I have read the N.T. through in Greek 20 times and several times in German. Bonnie began reading the O.T. through the first of Jan’y and has already finished Numbers and is making very commendable progress. Carolus and Herman have their memory verses every Sunday, usually a Psalm, and the other children take great interest in having me read to them Bible stories, especially about Moses, Joseph, Daniel etc. They know more about the O.T. saints than many grown people and are also great friends of Mary and Joseph, but always say they think the most of God. Arthur is bound that I shall buy him a Bible for his birthday, but as that is a long way off yet I don’t need to worry about it. I saw Dr. Huehnergurd the other day and got his bill for the opiration he performed on Marion and Herman last fall. He charged $20, which is not out of the way seeing he had to pay the Dr. whom he had to assist him. Well, I will have to close. Hope you are entirely well again. With love and all good wishes, I am 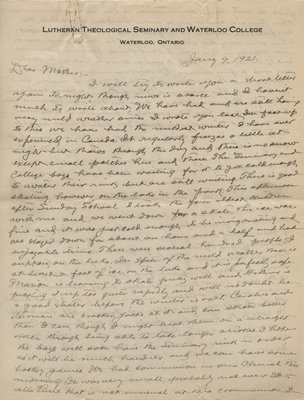