My first letter in the new year shall be as ever a letter to you. Allow me in the outset to wish for you the richest joys and fullest blessings that the year has in store. May the goodness of the Lord accompany you every day during the coming year! We had service in our church on New Year’s morning. Pastor Bockelmann preached a splendid sermon on Matt 14:22-32 taking as his topic Life a voyage. This morning Dr. Hoffmann preached a most excellent sermon on Matt. 6:33, also a New Year’s sermon, the text giving the theme The best New Year’s resolution. To-night Pastor Bockelmann is preaching a New Year's sermon in English. Bonnie and the big boys have gone down. Marion was with me to the German service this morning. New Year’s day was rather gloomy. It rained and thawed all day and all last night, taking our snow, of which we had over a foot, nearly all away. Enough is left on the roads to enable cutters to run, but on the land generally there are only patches of snow here and there. To-day however is very much colder with a high and heavy wind and flurries of snow now and then. There was one advantage in the thaw, and that was that it made good ice for skating. Carolus and I were down on the lake in the park this afternoon for an hour or so and I had my first good skate of the season. The ice was as smooth as glass and the skating was fine. New Year’s day is always Election day (except when it falls on Sunday) in the towns and cities of Ontario. Our old Mayor was reelected here in Waterloo and over in Kitchener a Mr. Greb who is a member of Dr. Maurer’s Church was elected Mayor. As the members of both the Dominions and the Provincial parliaments are Lutherans the Lutherans hold all

practically all the political offices of importance in this locality. Our vacation will soon be at an end; we open up again on Tuesday. The vacation has passed very rapidly and I did not get all the work done that I intended but have sufficient head that I needn’t worry at present. I would have got more done but contracted a cold in my head which kept me from work for a couple days this past week. However, I am pretty well over it again and think I can get down to business by Tuesday. Tomorrow hardly counts as a holiday since it is workday. The Board at its meeting last week granted each of the professors a bonus of $100 in lieu of the $300 increase asked by Profs. Willison and Zinck. These latter are so dissatisfied with it that they will not accept it. But as I didn’t ask for an increase I have no scruples along that line, and every little helps. I think that at their next meeting the Board will increase salaries all around. I hope so at any rate. I have my coal nearly all paid for now and I hope to save up a little between this and spring. I still owe $25 on the piano having got an extension of time of payment from the company. I bought Bonnie some navy blue [?] for a dress last week, also material for a dress for Marion. The price on the material for Bonnie’s dress was down a $1 a yd from what it used to be, and I think there will soon be a general lowering of prices to somewhere near the pre-war level. The factories are nearly all closed down, but some of them have already opened up paying their hands reduced wages and others will follow suit shortly. The children have all been quite well through the holidays except that Marion and Arthur had pretty bad colds a part of the time, and they have also been very lively. They make too much noise for Bonnie and I guess she will be glad when they are back in school again, but I don’t expect them to sit up for shapes like ladies and gentleman and consequently don’t mind them. Eileen is the greatest little girl you ever saw to wait out on her father. She bring me my clothes every morning,

takes my rubbers when I come in and puts them in their place in the front hall, puts my shoes in the closet and brings me my bed-room slippers etc. The other day, I came into the kitchen and took my rubbers off and the hall door was shut. So she took my rubbers up the back stairway and down the front into the hall and returned the same way. She talks in sentences and sings like a lark. She can sing “Holy Night”, “God Save the King” and several other Christmas pieces. But Arthur is the boy to pick up tunes. When he came back home from St. John last summer he could even hum Donald’s violin exercises. He heard them sing “Merry Merry Christmas” at the community tree in Kitchener on Friday before Christmas, and caught the tune and the words though he heard it only once and has been singing it ever since. Robert is a pretty good singer too and can carry a tune very well, but is not equal to Arthur. We find it difficult to get Carolus and Herman to practice though they are still taking lessons. Marion is making good use of her Bible and is an omnivorous reader of Library books, especially animal stories. We had a card from Blanche during the holidays, but as she didn’t put any address on her card I was not able to answer it. However, she said a letter would follow. She seems to be well-satisfied with her Florida home. I am still enjoying the fragrant aroma of my Christmas cigars, but, I suppose I will soon have them all consumed and then will go back to my stable old pipe till next Christmas. Yesterday evening I had supper at Dr. Maurer’s. Mrs. Maurer’s brother and his girl were there, Ruth Maurer and her fellow and Mrs. Rohrig and her two children. So there was quite a crowd on, but they had sufficient for all, the especial dish being oyster soup. I had a nice glass of real wine there, it being

the first and only thing of its kind during this holiday season. If the prohibitionists have their way, I suppose it is only the beginning of many dry Christmases yet to come. Well, I think, I have scrawled about enough for this time. Thank Herbert for the beautiful Scriputre calendar he sent me. With much love to you all, I am 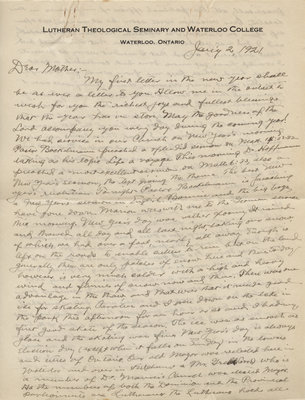