Everything is quiet again to-night. I have just put Eileen to bed and Bonnie and the rest of the children have gone down to the Church to the Christmas concert. Pastor Bockelmann set it for to-night, I presume in order to obviate the necessity of getting up an English sermon, which is a rather hard task for him. As he preached yesterday morning at 8 o’clock and this morning at the usual hour I suppose he thought he had done enough along that line and deserved a rest. Both these services were in German. I helped him out by taking the Liturgy, which I got through with very well. We have been having ideal Christmas weather for the past few days. It is not extremely cold and has been snowing off and on since Friday. You will get a good idea of our Christmas weather from the picture on the first page of The Lutheran of Dec. 23rd. Just transfer the scene of the falling flakes to Waterloo and you will have it. Friday afternoon a big community Christmas tree was held in Kitchener. I took all the children over to see it except Eileen. It was in the open on Market Square and they had Santa Claus and his sleigh drawn by four white horses. The children enjoyed it very much and Marion, Arthur and Robert were favoured with stockings of candy. Carolus and Herman were somewhat disgusted that they didn’t get any, but the tree was only for Kitchener children and tickets for children of school age were given out in the schools. Christmas eve we had our own tree at home. We came very near not having a tree. Those brought in

from the country were scarce and expensive. Carolus came to the rescue and climbed one of the spruce tress at the corner of the garden on Jefferson Ave. and decapitated the top which made an excellent tree. Bonnie made a beautiful wreath out of the Galax leaves Pearl sent. So we had everything looking very Christmasy. And thanks to your generosity and that of Father DeLong abundance of presents were not wanting to the children. I bought beautiful pictorial Bibles for Herman and Marion, also skates for Herman, sleds for Carolus, Marion and Arthur, a Push-a-bike for Robert, also a drum for ditto, a toy pistol and caps for Arthur, a crokinole board for Carolus etc. I got for myself a box of very fine cigars from Father DeLong a beautiful linen handkerchief from Mabel, and a pair of bedroom slippers from Bonnie. Eileen was well remembered with dolls, shoes and stockings – these latter together with one doll coming from her Godmother. Eileen was the happiest one around. She was so taken up with the tree and with her presents that she could scarcely contain herself for very happiness. It fairly beamed all over her face. She marched in at the head of the procession when all went in singing ‘Away in the manger’. She also joined in the singing of all the hymns and picked up the tune and some of the words of Holy Night, Silent Night. She gives promise of being as good a singer as Arthur. We had a big Christmas dinner, the main dishes of which were a 12 lb. goose perfectly roasted and the never failing English Plum pudding, which Bonnie is an adept in making. Of the other dishes there were a plenty and sufficient variety to satisfy a royal table. I had difficulty to stop before eating too much for comfort and health, but succeeded. I must not neglect to say as I thank you for your kind contribution that your $10 netted me exactly $1.70 additional owing to the heavy discount on Canadian money at present prevailing. This afternoon the children and I went up to the sand pit tobogganing and had a great time. We were up also on Christmas day trying out the new sleds and things. Carolus

is highly pleased with his Crokinole board, but hasn’t reached the point of efficiency where he can take a game from his father yet. We played a little while this afternoon after returning from the sand pit. We also had Eileen out tobogganing near the house this afternoon and she enjoyed it immensely. Minnie sent Bonnie a present of $2.00 and Bonnie thinking that she was in need sent her $5.00. So Minnie came out $3 to the good in the firing on the Christmas present line of battle. Aunt Meda sent a note which we only received to-day in which she enclosed $3 as a present for the boys. Presumably she is sending something else for Bonnie and the girls. I don’t know whether I will get around to a formal note of thanks to Mabel for the fine handkerchief she sent me. But as she is no doubt now at home I will request you to convey to her my unbounded thanks for so useful an article and one so necessary. We received cards and Christmas greetings innumerable from the four winds and various sources. I sent out, I think, about 50 and probably received as many. It’s a great time, this Christmas, for renewing acquaintance and strengthening the bounds that bind. I am glad to say that it has been a lovely and happy Christmas for us all and that not only in a secular but also in a religious sense. Dr. Maurer will have his Children’s Christmas Service on Monday evening. Some of us will probably also go to that. The Board will meet on Tuesday and the Committee on Amalgamation of Synods on Wednesday. I am a member of this last committee and favour the amalgamation of our two Synods, but I don’t think it will get through on account of the fear of the Germans that English will get the upper hand. Prof. and Mrs. Slanker went to their home in Pa. for the Christmas vacation. Just before leaving he sent in his resignation to Dr. Maurer, Pres. of the Board to take effect Jan’y 22nd. This will leave us in a bad predicament again and will probably mean largely increased work for all of us. I don’t think

Prof. Slanker has done the square thing in the matter. In accepting the chair he holds it was assumed that he would hold it for the year and not vacate it in the middle of a term. He was generally liked and seemed to be getting along all right, though he found the work hard. I think Mrs. Slanker was largely at fault as she has not been satisfied ever since they came here. The Board will have some difficult problems to tackle at its meeting on Tuesday. It is likely we will have Pastor Bermon to entertain at that time and will be glad to see him again. Well, I don’t think of anything else that can properly be denominated news or newsy, so I will close. Wishing you and all at home and within reach, all the joys of this blessed season, I am 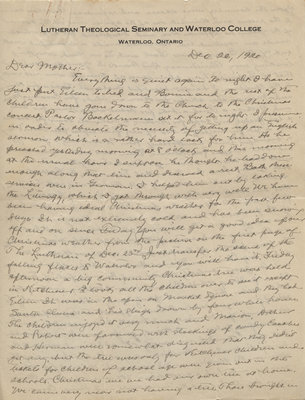