To-night I am situated precisely as I was last Sunday night. Bonnie and the boys are at Church and the small children are in bed and silence reigns supreme. It would be a good time to write if I had anything in particular to write about. I will say in the outset that Bonnie is O.K. and is interiorly sufficiently likely to disabuse her mind of all uneasiness on that score. Christmas is rapidly approaching and everything is promising for a “white Christmas”. We have had snow flurries nearly every day this last week inclusive of to-day. It didn’t snow much at a time but what fell stayed and has been accumulating from day to day till to-day when it became sufficient for several cutters to venture out. We have only two more days of school till our vacation sets in. I had an offer to preach in the Unionville-Sherwood parish on next Sunday and it would probably have netted me about $10, but as it involved my being away from my family over Christmas I declined the offer. Prof. Willison, I guess, will go. I think it is worth more than $10 to be with my family at Christmas. Bonnie and I have already given each other our presents. She gave me a new pipe which was sorely needed, seeing that my old one was getting strong and I gave her a neat pair of pink undressed kid (symbolic also) bed room or boudoir slippers. Father DeLong also sent in his annual contribution of $20.00 for presents for the children, and I have already invested about half of that chiefly in sleds. Bonnie has bought presents for her people and had a busy afternoon this p.m. wrapping them up and getting them ready for parcels post. Yesterday I bought two lbs. of Limburger Cheese which I sent off as a Christmas gift to Pastor Pifer of Bridgewater in consideration of his kindness to me and to Pearl last summer. He is very

fond of Limburger, which shows good taste. Incidentally we got a lb. also for ourselves and finished it up in two meals. Bonnie ate almost as much of it as I did and declared it was the best cheese she had ever eaten, which shows that her education is not being neglected. You almost spoiled it though when you were here by taking the cheese out of your mouth and putting it on your plate instead of eating it properly and sending it down your throat to the right receptacle for masticated foods. There seems to be as great a display as ever of Christmas goods in the stores and the show windows this year, but this past week the trade was duller than usual at such a time. Unless it picks up briskly this week many merchants will have a lot of goods left on hand. A great business panic is evidently close at hand. Practically all the factories of Waterloo and Kitchener are closing up this week indefinitely and thousands of people are going to be thrown out of employment. It will make it a hard winter for many people and I don’t know how many of them will pull through. It will probably have one advantage for us however as there will undoubtedly come about a great cut and slump in prices. It is already in evidence in a number of things and in the many bargain sales that are being offered. But the hard times and enforced idleness have their influence also in increasing crimes of theft and burglary. A regular wave of such crimes seems to be sweeping over the country according to the papers, and is also in evidence locally. Prohibition doesn’t seem to be making the people any better and there is still very much use for the penitentiaries, reformatories and gaols. We haven’t still as much prohibition here as you have in the states and will have to have one more vote on it before we are ‘bone dry’. That vote is scheduled for the last of April. In the meantime if I can rake enough money together I want to send and get a gallon or so for emergencies. It would come in good in case of colds, which are quite frequent with the children and in case of La grippe, Flu, etc. Our public schools will close on Wednesday of this week, without any formalities, however, on account of the prevalence of small pox. One of the public schools in Waterloo and the Separate School (Catholic) have been closed a couple weeks already, but our school, the Central, has been kept going. Carolus passed his examinations last week, but Herman failed to make

the requisite grade for passing. However, he may be able to make up for it during the remainder of the year. It was harder for him as he had been put forward a year at the beginning of the term. Marion and Arthur are doing wonderfully well. Marion gets books from the Library and frequently reads a book through in a night. I think she reads too much. Arthur can spell words of considerable length and is good at adding and writing. Eileen looks like Arthur. She is about his build, has the same round face and dark heavy eyebrows and is as pretty as a picture. She is going to make a neat house keeper. She never sees a mat out of shape but that she has to straighten it out and is always busy cleaning and putting things in order. She is of a particularly bright sunshiney disposition and talks well for her age. Robert is about the loudest and noisiest boy of the family and is a bright fellow too, but a great tease. To-day he came home from Sunday School before the others. When he came in he said “Marion won’t come home for a long time yet. I came home alone.” When the others came back they said he cried in Sunday School and that the teacher took him out. But he didn’t tell anything about that.

I heard last week that Rev. Wahl had received a call to Lunenburg but have not heard whether he accepted it or not. I hope that he will accept it if he has not already done so. It would be a great advancement for him and would besides place a man from our Seminary in the most important parish of the Nova Scotia Synod. Dr. Hoffmann gave a reception to the Seminarians on Thursday night of last week. I was invited over and we spent a very pleasant evening and besides had some excellent eats and smokes. Bonnie has baked her Christmas cakes – 2 fruit cakes. Both turned out particularly well. We have already sampled one of them, and it was hard to beat.

I was sending out postcards to-day and as I didn't have sufficient stamps for all of them I will enclose some in this letter. I expect to be pretty busy during the greater part of the vacation preparing some lectures which I propose to give the Senior class after Christmas. Well, I have written at more length than I expected when I began and most now close. With love to all, I am Most Sincerely yours, 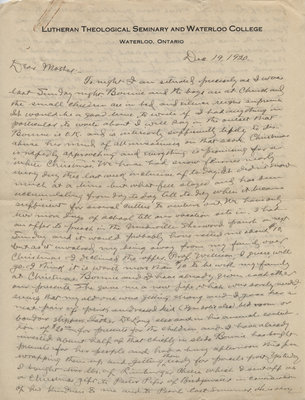