Creators
Carroll Herman Little, Correspondent
Candace Little
, Recipient
Media Type
Text
Item Type
Correspondence
Description
Handwritten letter from Carroll Herman Little to his mother on December 5, 1920. Little describes family life with wife Bonnie and their children; his work as a Lutheran pastor and faculty member at the Evangelical Lutheran Seminary of Canada in Waterloo, Ontario; the financial situation at the Seminary; and the fundraising efforts of the Women's Auxiliary.
Notes
Carroll Herman Little (1872-1958) was a Lutheran pastor, and a professor and administrator at the Evangelical Lutheran Seminary of Canada (later Waterloo Lutheran Seminary; now Martin Luther University College) in Waterloo, Ontario.

Just a few lines to-night to let you know that all is well with yours in Canada. There isn’t much news and I am late in getting started, so I am not likely to inflict a very long letter upon you. I will write only as long as my pipe lasts and the steam keeps up. I almost performed a work of supererogation to-day – went to Church twice and read the service both times, this morning in German and this evening in English. I am ready to tackle it in French now if I am furnished with a congregation owning that language as its mother tongue. Pastor Bockelmann’s voice showed great improvement to-day and he preached with old time vigour and was greatly encouraged. He doesn’t want to resign and it would be unfortunate for the Church and especially for the Seminary if he did; but up to to-day he has been seriously considering the matter. To-night the Every Member Canvass Committee made its report. Total benevolence pledged totaled about $850, which all seemed to be quite satisfied with, though I think it is very small. However the people have never been educated to do much and this is a starting point, a sort of stepping stone to greater things. Thursday, Friday and Saturday the Ladies’ Auxiliary of the Seminary held their annual sale over in Kitchener. They were as usual quite successful

and cleared over $800, which was $100 or so in advance of what they made last year. The few women who compose the auxiliary are great workers for the Seminary. They have for a number of years kept the Science room supplied with scientific apparatus and are ready to pay for anything as far as their funds go. They agreed to pay for some $200 worth of chairs that I ordered for the Seminary this fall. Our finances are not in very good shape and something will have to be done very soon if the Seminary and College are to be kept running on the present standard. We are getting this year increased support from the United Lutheran Church which will help out some. We will get $4500 as over against $1200 last year. But until the institution gets better support than it has at present we can’t expect to obtain further increases in salaries, which are an urgent need. With $150 a month I can scarcely make ends meet. I was down to 10₵ Saturday when my cheque came and when I get all my monthly accounts paid up I will have scarcely anything to go on for the rest of the month. However things are beginning to come down and when I get my piano and coal paid up I may be able to save a little. I owe only $25 on my piano any more and I don’t know how much on my coal. But with a growing family there is always something extra cropping up that calls for an outlay of cash. The weather has kept up its record for dampness. It rained nearly every day this last week with the exception of one fine day about the middle of the week. To-day was

much colder and was marked by snow-squalls which kept up at intervals all day and still at it with high wind to-night. It promises to be quite cold by morning. Bonnie had a letter from Meda to-day. She is getting along nicely with her music in Boston and is looking forward to a visit from her husband next week. ”[?]” is at Mrs. Johnson’s, widow of [?] of the former Episcopal rector at New Germany, but now living in Kingsport N.S. She had gone to Kentville to Max’s, but presumably didn’t get along with Max’s wife. Bonnie wrote her soon after she left for Max’s, but hasn’t heard from her for over two months, but hears occasionally indirectly through Meda. We will soon be on our vacation again. We will close on the 21st and reopen on the 4th of January, which will give us quite a nice breathing spell. Well, my pipe has gone out and my news has run to seed, so I will close. With love to you all, I am 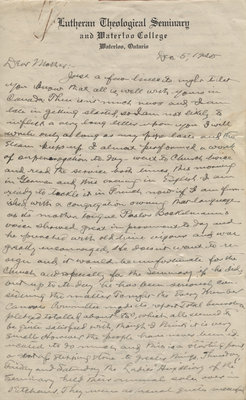