As it was a week ago to-night since I wrote you last I will try to give you a few lines again to-night. Bonnie and the boys have gone to Church and I have the little ones all in bed, so the coast is clear. The weather, however, is far from being so. Early this morning we had sunshine for about two hours. It was the first glimpse of any of the heavenly luminaries that we had had for ten days. During this period neither sun, moon nor stars appeared. We thought this morning we were going to have a fine day for a change, but it soon clouded over again and became like the preceding days. It rained or snowed every day last week but was mostly wet snow. We still have some of the snow that fell a week or so ago though the ground is hard in spots. The weather is very unusual for this climate. There has been one redeeming factor though: it has not been very cold and has been a saving on the coal bin.

I don’t know whether I told you that Bonnie took the fur lining of her fur coat and had a fur coat made for Marion out of it. It was just finished last week and is a beauty and Marion is as proud as Lucifer over it, as she may well be. The woman who made it up charged $10 for the making of it. The lining, buttons etc.

cost five dollars more, but a coat like it probably could not be bought for $50. We had it made large so that it will probably last her for two or three winters. Marion wore it down to Church this morning and to Sunday School this afternoon and was the envy of all the little girls of her age. The children are now all pretty well fitted out with winter coats except the baby and Bonnie plans to turn Marion’s little red coat and make it over for her. Pastor Bockelmann preached this morning an Advent sermon, taking as his text the 93rd Psalm. He seemed to preach with his old time vigour and if he holds up at this rate I think he will be able to continue his services in this parish. To-night The Every member canvassing Committee is to make its report. It ought to result in a large increase in funds. I heard last week that the Morrisburg Parish had extended a call to Rev. Wahl of the Conquerall Parish in Nova Scotia. He would suit the Morrisburg people fine if they could get him, but I hardly think that he will accept their call. Rev. Hauser of Lunenburg was to preach his farewell sermon at Lunenburg to-day. He is going back to Pennsylvania, having accepted a call to some parish there. I don’t know what Lunenburg will do. Imagine they will call Rev. Wahl. At least they intimated to him that in case Rev. Hauser left they would extend a call to him. Some of them, I understand, want Prof. Zinck, but I don’t think he would leave here yet awhile anyway. Another of the ministers in the Canada Synod has retired, Rev. Remby of Hamilton. This makes 13 vacancies in our two synods and we have only six men in our graduating class this year. I don’t

know what we will do if things keep going this way. The Seniors are practically all booked for the Christmas vacation supplying various places in our two synods. Mr. Gartung will go to Morrisburg, Jacobi to Dunbar and Howald to Unionville. The other three will supply in the Canada Synod. Everything has been moving along like clockwork in the institution. Next week we will begin our College examinations. Outside of French, however, they do not concern me, as I have only religious subjects in the College on which no examination is held. I haven’t seen Dr. Maurer for a couple weeks. I haven’t got down to Kitchener and he hasn’t got up here. I believe he has a considerable increase in his family now. Mrs. Rohrig and her two little boys and Miss Eleanor Moorehouse were expected about two weeks ago. These with Ruth and Carl Maurer will give them quite a houseful. St. John’s Sunday School will begin practicing their service Monday night. Marion says she is going to take a piece. I wanted Arthur to but he is somewhat shy and holds back. The children are all quite religious and take a great interest in Sunday School and Bible Stories and know a great deal about the Bible. They all want Bibles for Christmas except Carolus who got his last year. I guess I will have to try to provide Herman, Marion and Arthur. Marion can read the Bible as fluently as anybody. I haven’t started her off on memorizing yet but Carolus and Herman have their portions every Sunday. But I must close. With love to all, I am 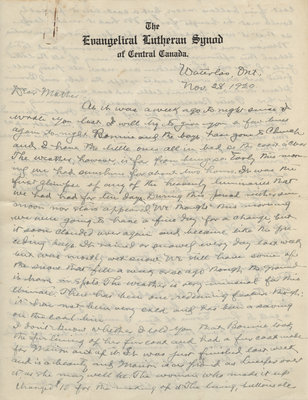