I have just got back from St. John’s where I preached again to-night for Pastor Bockelmann who was incapacitated by reason of a cold accompanied by severe hoarseness. His throat seems to be quite weak and every little cold knocks him out. I’m afraid that sooner or later he will have to give up his big church and take something smaller or perhaps move to a milder climate. Apart from his throat trouble he is quite well and very active. He paid me $5 for my service to-night, which will help out a little in the fast approaching Christmas time with its heavy financial strain. I was only asked to preach for him yesterday morning and had very little time for preparation, but I came through with it very well and made, I think, a very good impression. All the Professors were out to-day – Profs. Lincke and [?] in their parishes, Prof. Willison at Port Colborne, Prof. Schaeffer at Stratford and myself at St. John’s. Student Walters-[?] preached in German at St. John’s this morning. I think it was his

first regular sermon. He didn’t do too bad in view of the fact that he also was not notified to preach until yesterday morning although he didn’t astonish anybody by his eloquence. He had one advantage and that was that being a native-born German he had no difficulty with the language. He is the best student we have as far as grades go and is a regular bookworm and I think will develop into a good preacher. We matriculated another student last week, which makes two new ones recently. Both these are prospective students for the ministry. We find no trouble in getting the students, but our greatest difficulty which is approaching a crisis is the financial one. The Professors all need more salary but where the money is to come from is the question. I was talking over the matter with Pastor Bockelmann in the sacristy to-night before service and he thought the situation was pretty blue from the financial side. Prof. Willison has been side-tracked on the Montreal Church proposition and Pastor Klacher of Stratford is now booked for that place but Prof. Willison, I understand, is going to demand $1500, and if he doesn’t get it he is liable to leave. I should have myself about $2000 in order to live respectably and have been teasing Bonnie about moving to the west to take up parish work in some of the vacancies where good salaries are offered such as Vancouver and Victoria, but she vows

she will never move again. And in fact I have no desire to do so myself, being perfectly well satisfied with my present position; but I would like to have enough to live on and clothe myself and family decently. However, I am not worrying about it in the least and am hoping for better times ahead. The Rev. Ernest H. Beckman died at Winnipeg last Monday and his body was shipped to Hamilton where the funeral and interment will take place to-morrow afternoon. At his request Prof. Willison is to have charge of the services. Rev. Beckman was formerly pastor at Galt and was a sick man when he went to Winnipeg about two months ago. I said when he accepted the call there that I would give him about three months to live, but he didn’t even reach that limit. He had lesion of the heart with tubercular complications. He graduated from our Seminary in 1917 and is the first one of our graduates to die. He was very energetic and ambitious but didn’t have the physical strength to see it through. He preached only once in Winnipeg after he went there. Dr. Bieber will no doubt give him a great eulogy in The Lutheran as

he was one of his especial protégés. Mrs. Bermon was still holding out at last account. Her case too is entirely hopeless, but it is wonderful how long she lasts in her condition. When he wrote me over two weeks ago she was taking no nourishment and could not speak above a whisper, and has been so low that he hasn’t preached since then. I don’t see how she can last much longer. We are having very cold weather again. We had a little thaw last week which took most of the snow away but to-day it was snow squally and very blustery. The ice is over a foot thick on the lake in the park and the boys and I had a fine skate on it this afternoon. I took Marion and Arthur along who enjoyed skating with their shoes on the ice. On our way home I slipped on the ice on the side walk and fell pulling Marion and Arthur along with me, but fortunately none of us were hurt. The children are busy with their Christmas pieces. Arthur said the Supt. said they sing their pieces without making a mistake and so nicely and softly, and that the Supt. said they did it much better than they did last year. They first Christmas concert will be held by St. Matthew’s Church, Kitchener on Tuesday of this week. Well, I have about reached my limit, so I will close. With love and all good wishes, I am 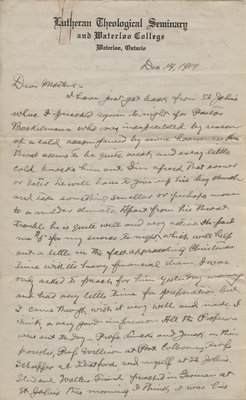