Bonnie and the big boys are at Church to-night and I have the little folk all in bed, so I thought it would be a good opportunity for me at least to begin a letter to you again. We have had a very snow squally day, but it was not very cold and as the snow was wet it did not lie on the ground and it was only toward evening that it succeeded in making it white. Mr. Geelhaar, one of our students, preached for Pastor Bockelmann this morning and is preaching for him again to-night. As I had heard him a few Sundays ago I took Marion and Arthur, my little Germans, and went over to Kitchener had heard Pastor Schmieder in St. Matthew’s. According to German custom he made the service a Totenfest in commemoration of those in the congregation who had died during the Church Year which came to an end to-day. Marion has picked up enough German to say the Lord’s

Prayer with the congregation. Arthur also says parts of it. This was my first ride in the new “Pay-as-you enter” streetcars. They are quite nice and seem to be more roomy than the old cars. Friday afternoon and evening we had Dr. Yonger, United Lutheran Supt. of Missions for this District with us. I had him to come over and give the boys a lecture in our chapel, which he did felicitously. In the evening Profs. Willison, Zinck and myself went over with him to Pastor Maurers where we held a meeting of our Synodical Mission Committee and went over all our Missions with Dr. Yonger. To-day Pastor Maurer is in the Port Colbourne-Welland Parish in his official capacity as Pres. of Synod and Prof. Willison is preaching for him in First English. From what I have heard that parish will not call Pastor Murray. They say he preached as fine sermons as they ever heard but as he didn’t go to the door and shake hands with everybody the young people thought he wouldn’t be “a good mixer” and accordingly metaphorically sat down on him. I understand, however, that he has a call in New York State from one of the parishes he has been supplying.

Thus these handshaking Methodist Lutheran pastors spoil the congregations for a good man. The sticker which you will observe on the back of this letter was designed by Pastor Bockelmann for the purpose of advertising our institution and of raising money for it. He had several hundred thousand printed at a cost of about 1/10 of a cent apiece. They sell 3 for 5₵ and 20 for 30₵ leaving a fair margin of profit, and are to be sold by the pastors to their parishioners in the two synods. I think it is a good scheme to raise money in a small way. I have sold about $7.00 worth already to the students. We failed to get anything from the Simmer’s estate. He had made out a will in which he bequeathed fifteen or twenty thousand dollars to the Seminary but died rather suddenly without having it properly signed. In this state his will, I believe, was found in his pocket after his decease. There are two cases of the “sleeping sickness” in Kitchener, one at the home of the patient, the other in the Kitchener-Waterloo hospital.

The conclusion of the Medical authorities here is that it is an aftermath of the Flu which is, I believe, as good a guess as any.

Mrs. Good, our nurse when Eileen was born, was here Friday evening for tea. She was surprised to see how the baby had developed and I put her, i.e. the baby, through some of her stunts for Mrs. G’s benefit. She “patty cakes”, waves her hand, beats time to songs, plays the piano and says “papa”, which is doing quite well for one of her age. She thinks the world of her father and when Bonnie asks her if she likes “mamma”, she always says “Papa, papa”. We had a card recently from Herminie showing a picture of the beautiful university grounds. She likes the 'North' so well that she thinks she wouldn’t be satisfied to go back to the far south again. I hope to get around to write to her before so very long. The Seminary and College are running along smoothly and the Christmas holidays will be on almost before we know it. Carolus is helping me now by shaking the coal ashes which relieves me of a very dirty job. He would look after the furnace too, but I hardly think he is qualified for that yet. He and Herman are getting along nicely with their music. He is getting so also that he can carry a tune. Well, I will have to close. With love to all, I am 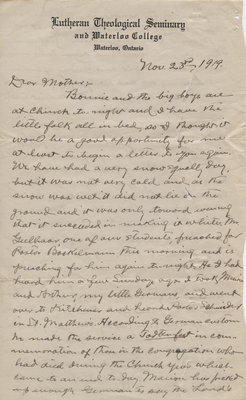