To-day we had a beautiful bright but cold November day. This afternoon a public open air memorial service with the unveiling of a tablet erected in honour of the soldiers who had fallen in the Great War took place. Thousands of people gathered in front of the Public Library where the service was held. The Mayor and all the pastors of Waterloo were assigned parts in it. I also was called on, as I was at the Armistice celebration a year ago, and made an address in which I think I maintained my reputation as a public speaker. The band was in attendance, a couple hymns were sung and the whole service was very impressive. I also had the honour of selecting and reading the Scripture lesson. The whole affair was under the auspices of the Daughters of the Empire. Pastor Bockelmann was not on the program on account of his throat trouble. Aside from this the Speakers were

the same as last year. The speeches were all very good but I liked the address of Father Meyer (R.C.) the best. He is a young priest and handsome and quite clever. He expressed himself at the close of the service as being very glad that he had the opportunity of hearing me again. This morning I attended St. John’s and heard Dr. Schaeffer again. He is a good preacher but shoots a little high I think for the congregation. Marion and Arthur always go with me to the German service and Marion has picked up the Lord’s Prayer and says it with the congregation. She is learning fast and can spell a good many words by sound and can do considerable in the way of mental arithmetic. Arthur is learning well too in the Kindergarten. His specialty is singing but he can print quite a number of letters beautifully. Robert is quite a singer too. His favourite piece lately has been “Jesus loves me, this I know; For the Bible tells me so”. Marion is likewise improving in singing and can carry a tune pretty well now. The two big boys are getting along nicely with their piano music. Pastor Bockelmann went down to Toronto Friday and had an operation performed on his throat by

a specialist who assured him that he would be able to resume his preaching within a couple weeks. He consequently feels greatly relieved and encouraged. On Friday night a public reception was given by the Preston congregation to their new pastor, the Rev. W. H. Knauff. The Faculty and students of the Seminary were invited. I didn’t go, but sent Bonnie down as my proxy. She went with Prof. Willisons in their car as did also Pastor and Mrs. Maurer. Those who attended reported the reception as enthusiastic. You remember the ring Marion lost while you were here? Well I found it one day not so long ago crushed in the mud near the shed. I just could see the edge of it but recognized it at once. So it is safe again. Bonnie and the boys have gone to Church to-night. She was house cleaning all last week, but, I am happy to say, is through now except for the washing of the curtains which will be attended to to-morrow. I don’t remember whether I told you of Prof. Willison’s move to have Pastor Maurer made a D.D. or

not. He drew up a petition and had several of us to sign it and presented it to Dr. Elson, Pres. of Thiel, when he was here last week. He says Dr. Elson fell right in with it. So the likelihood is that he will be Dr. Maurer next spring. As far as Theology goes he doesn’t know a big pile, but this is the case also with many others. He will no doubt be very proud if he gets the title. I had a letter last week from Pastor Bermon. His wife is critically ill in the hospital at Cornwall. He rather ambiguously says, “I hope for the best. The best is yet to come”. Next Sunday evening I am to preach in St. John’s. Dr. Schaeffer is going to Phil’a over the weekend to see his family. To-day I found one cigar in that package you gave me that I had overlooked. I am smoking it to-night and am thinking of you and recalling the pleasant days of your so welcome visit. I am very glad Bonnie decided not to go home. I would never have gotten out of debt if she had done so. Everything is going up so high that I can’t make ends meet as it is. We have to pay $1 a pair for stockings for Robert and for the other children higher in proportion to size. Well, I have about reached my limit. So I will close for this time. With much love to you all, I am

P.S Prof. Zinck had Bonnie [?] me & Dr. Schaeffer over for tea the other night. They didn’t invite Willison’s. 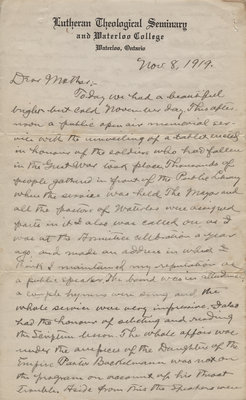