I have just got back from Preston where I preached to-night and as I made record time getting back inside an hour I think I will have time to write you at least a short letter between this and bed time. I had a good congregation out at Preston tonight and gave them a pretty forcible sermon which they seemed to appreciate. Everything passed off well except that they forgot or neglected to pay me before I left for home. However the ten dollars will come in good when it comes. The previous time they paid me right on the spot before I left the Church. This is the last time I will preach there, I suppose, as Pastor Knauff is due there on Thursday of this week and will hold his first service as pastor on next Sunday. He is to begin with a German sermon. This, I imagine, will not be so easy for him after eleven years of English preaching. But he is German born

and I guess it will come back to him by and by. He phoned me yesterday asking me to send a student as supply to Port Colborne next Sunday. I told him that as it would require three days to make the return trip and hold the services I didn’t see how we could fill the parish from the Seminary. I suggested that he call upon Pastor Murray to supply the place. He agreed to do this and I think it will culminate in a call to Pastor Murray. I received a letter from him last week in which he said he would be willing to supply the parish if called upon to do so. He also asked to be remembered to you. The work here at the Seminary is running along smoothly. The Cossman-Hayunga missionary society held it initial service in the Seminary chapel Thursday evening with an address by Pastor Maurer and an illuminated lecture on the Holy Land by Dr. Schaeffer who spent a year in Jerusalem pursuing oriental studies several years ago. Dr. Schaeffer preached in St. John’s this morning for Pastor Bockelmann. He speaks a very beautiful German and has

a pleasing voice but is rather jerky in his gestures and style of delivery and preaches, I think, a little too high for his hearers. But he is a fine man and we all like him very much. He is quite popular too, I think, with the boys. What do you think of my new paper? I had it printed last week for the use of the Faculty. Enclosed I am sending you a folder of the Community course offered by the Kitchener-Waterloo Collegiate. Bonnie is taking the course on Dress-making and goes down two evenings a week. It is offered free of charge, a deposit of $3.00 being required as evidence of good faith. This, however, is returned if the student is regular in attendance throughout the course. Bonnie thinks she is going to like it and expects to learn a great deal from it. We had a heavy rain all day yesterday. To-day it is much colder again. The weather prognostication called for snow squalls to-day, but they

did not materialize. The day was fine and for the most part bright. Well, our election passed off Monday and we turned the Tories out but failed to turn the Liberals in. The United Farmers party elected the most members. They will likely join with the Labor candidates and form a government, leaving the two old parties out in the cold. We elected our Independent Liberal in this riding. Both Bonnie and I voted for him. On the prohibition question we seem to be in for bone-dry all right. Bonnie and I voted for moderate prohibition with beer and wine license and sale of the hard stuff through Government vendors, but the “drys” won out by a big majority. Kitchener and Waterloo, however, voted “wet” on all propositions by about 2 to 1. So did most of the other cities and large towns, but the rural districts went heavy for prohibition and I guess we are in for a long dry spell. I bought Marion a nice sleeping doll for her birthday Thursday and she is quite proud of it. It cost $2.25 but is non breakable and should last her a long time. The baby has one tooth through at last and several more coming. She gets brighter every day and is a dear little girl. Well, I must close. With love to all, I am Most Sincerely yours, 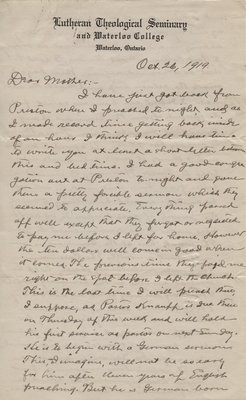