I thank you very sincerely for writing me so frankly & so cordially. It will be a pleasure, & even more than a pleasure, to answer your queries, & to give complete information on the subject which now

troubles you. You tell me that your clergyman makes two charges against me:

1° That I was not doing my part in recruiting in Quebec.

2° That I did not advocate Canadians assisting the “Old Land”, at the time of the South African

You then ask me what makes your friend so believe & so assert. As to this, the reason is very obvious. Your friend repeats what he reads in Tory papers, such as the Toronto News & others of the same ilk. If he had taken the trouble to investigate the facts, he

would be more careful about his statements. I would not in any way impugn his honor, but I absolutely challenge his asseverations.

As to the present war, here are the facts:

In the year 1914, I opened the campaign for recruiting in Quebec, in the month of September, at a meeting in Montreal.

In 1915, I addressed meetings, at St. Lin, my native parish, at Sherbrooke, at Montreal;

That is all that I can remember at the

moment, but there are other meetings of less importance, which I do not now recall.

As to the South African war,

I was then prime minister; it is matter of history that Canada sent three contingents within the few first

months of the war. So, I fail to see what is the point of the charge against me, when the facts thus speak so clearly.

I hope that you will communicate to your friend, my answer to his strictures, & if you desire some further information, I will be only too well pleased to provide it.

Accept my very sincere thanks for your great kindness & believe me, with great respect. 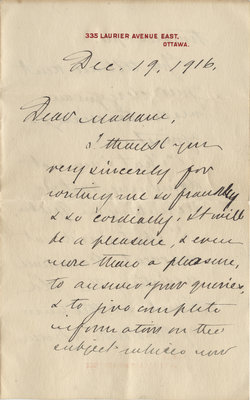