We have had to-day one of the hottest days for the first of June that I have ever experienced in Canada. In fact it was hot all last week but it seems to have reached a climax to-day. I attended Church this morning at St. John’s. After I came home we all took a basket and went down into the park where we had a picnic dinner under the shade of the trees by the lakeshore and got what little breeze was blowing. The children all enjoyed the outing immensely and it was also a pleasant change for the rest of us. The baby in particular seemed to enjoy it and was as good as pie in her carriage. To-night Bonnie and the boys went to Church and I thought I would improve the opportunity to write to you. But I hear the baby crying and am afraid I will have to stop before I get through and put her to sleep again. She still continues to be a model baby and sleeps all night without once waking up after she has been put properly to bed. My garden stuff is coming up nicely and everything is looking well. I will have to go into it with a hoe, I expect, next week. Marion and Arthur talk every day about your coming up on a visit. Whenever I

cut the lawn or plant out flowers or clean up Marion says, “You’re doing that so it will look nice when our people come to see us.” Arthur is more definite and says. “We want it to look nice when grandmother comes”. So you see their expectations are tuned high. I had a surprise to-day. Mr. Irschick who preached in First English this morning called in this afternoon and handed me their cheque for $135, the amount due me for preaching during the vacancy last summer. This will enable me to pay off Clarence and Mr. Casselman and will leave me about $50 to the good. Everything comes to him who waits if he doesn’t die during the long wait. The Board held its special meeting last week. All it did, however, was to ask Dr. Hoffmann to reconsider his decision and appointed a committee to wait on him about the matter. I hardly think their action was worth while as I believe Dr. Hoffmann’s answer is final. Dr. Bieber’s name was not presented or considered, though Prof. Willison made an active canvas of the Board in his behalf, even going so far as to ask members to vote for him. The delay is holding up our catalogue which has been ready for the press ever since Easter. If Dr. Hoffmann again declines as I think he will, it will mean another delay of at least three or four weeks which will be bad. The upshot of the whole business will probably be the continuance of the present regime for

another year. The idea is that the permanent President shall be active in raising an endowment of $150,000, which will be a tremendous undertaking and one for which I am not especially anxious or qualified. As the Germans are our greatest supporters and are the people from whom most of the money is to come, the President should be a German or at least one who is fluent enough in the German language as to identify himself with them. I am gaining along that line, but am not a full fledged German yet. And they are very “pernickety” about their rights. I have had fault found with the commencement program because it was not German enough. They had no German last year except a German sermon. This year I had one of the two addresses by the graduates to be made in German, a German sermon and a German hymn besides some of the choir music in German, and thought I was doing very well by the Germans, and yet some of them are not satisfied. On the other hand the English element and the general public would have found fault if more prominence had been given to the German. So you see we are as it were between the devil and the deep sea, and it hard to say which is the worst.

Our commence will come off Tuesday night and we expect to have a very pleasant time. The year’s work is the most satisfactory all around that we have had here and the number of students the largest. But I must close. With best wishes and much love, I am 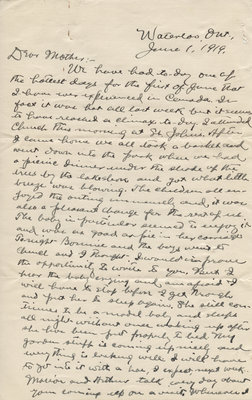