As another week has rapidly rolled around I suppose I am due you another letter and will accordingly do what I can to pay the debt. I received last week a note of congratulation and a promise from Herbert. The congratulation was double barreled, but none the less welcome for that, and I will look forward to the fulfillment of his promise. Today we had an English sermon in St. John’s by Dr. Yarger who is the Superintendent of this district of the United Lutheran Church. He is a General Synod man but of the conservative school and is quite an able man. He gave us a very good sermon on the text from the Psalms “Strength and beauty are in His Sanctuary.” He is not an eloquent preacher, but forcible, plain and practical. He will preach to-night in First English and at 9 o’clock will give us an address in the Seminary Chapel. This afternoon he addressed the Mission Sunday School in the north end of Kitchener. So he has had a very busy day of it. He has been making a tour

of our Canadian field and taking a first hand view of our missions. Unless the United Church does better by us than the General Council did I am afraid we will have to close up the most of our missions.

I don’t like at all the centralizing of our educational institutions. They propose to allow us only $5000 a year for running our Seminary and College, whereas it costs us over $7500. Besides this, out of every 1600 we raise we will get only $1200 back. Our people will certainly kick over this, and any way it would be much easier to raise money for our own institution than for education in general. But we will thrash this matter out at our coming Synodical conventions. I am getting pretty well along with my catalogue and will have the manuscript in readiness for the meeting of the Board during Easter week. The Board is contemplating great things in the way of progress. They are talking now of calling another man for each department and giving the Presidency of both to one man who will also be active as financial agent of the institution. I, of course, have no special claim for the position and am not particularly

desirous of it unless it should bring considerable increase in pay; but if it is offered me I will undertake it. I would object however to a man like Bieber. He is too much of a Jesuit and not conservative enough for me. But I don’t think there is any likelihood that he will be called. They may end in calling only a man for the College this year. We had another student last week which brings our total to 33 and almost fills our building. Before we can grow much more we will have to have a new building. This will cost a lot of money again, but is absolutely necessary. I think the Board will be pleased with the progress of the institution for this year. Little Eileen is developing into a model baby and is beginning to “sit up and take notice”. She received Jennie Lee’s nice present last week and a present of a knit sweater and pair of stockings from Mrs. Bockelmann. I think I told you before that we had selected Pastor and Mrs. Bockelmann as Godfather and Godmother for

the baby. I will baptize her next Sunday morning in St. John’s Church in connection with the morning service. Bonnie is quite well but hasn’t been outside yet on account of the weather. We had it very mild all through March up till last Thursday. One didn’t need to put on an overcoat to go down town. But on Thursday it began to turn cold and has been cold with high northerly winds ever since. It is a little milder to-day, but still far from warm. I think, however, that in a day or two this spell will be over. The birds, which are good indicators, sang quite lively this morning. The ice is altogether gone out of the lake in the park and even this cold snap didn’t form any more. I don’t remember whether I told you about Don’s baby last week or not. It was born on March 20. They expected a boy and had named him Uthert Napier, but when ‘he’ turned out to be a girl they called ‘him’ ‘Monica Joyce’. I don’t think much of this latter, but she is certainly to be congratulated on having escaped the former. I had a nice letter from my stepmother in law with more or less veiled sarcasm in and between the lines. I was down Friday to see Pastor Maurer. He is doing fine and expects to get out to Church next Sunday. But I must close. With love to you all, I am 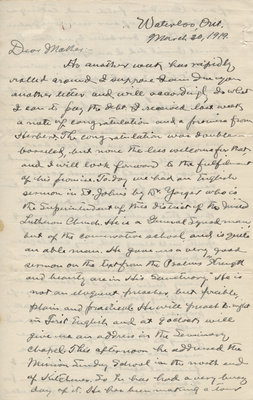