It is pretty late for me to begin a letter, but perhaps I can get a short one done between this and bed time. Bonnie and Herman and I went down to Church to-night. After Church we sent Herman home and went around and made a call upon Prof. Holm and wife, where we had eats and drinks and smokes. There are no people who understand entertaining like the Germans and they have the matter of feeding down to a fine art. We spent a very pleasant evening and when we got back just now we found all the children in bed asleep. Carolus had put Robert to bed. I had put Marion and Arthur to bed before we went to Church. Pastor Bockelmann preached in English to-night. His subject was King Solomon. His divisions were: Solomon the wisest man and the biggest fool, How God accepted His prayer and rejected him, How he had everything and yet was forever dissatisfied. He said Solomon’s folly was seen in his

“wifes”, of which he had a thousand in his harem and that he should have controlled them but allowed them to control him in the end. He didn’t give Solomon much credit but the sermon was quaint and interesting and rich in Germanized English expressions. Pastor Bockelmann is a fine German preacher, but his English still has room for improvement. I heard him this morning in German and he was very good. This is, I think, the second time I have heard him in English. Pastor Maurer is still quite sick. The Doctor doesn’t know exactly what is the matter with him, but suspects he has a growth in the stomach. He wants to put him through an X ray examination. He looks desperately bad and I’m afraid his days are numbered. I hope though that in this I am mistaken as he has for years been one of my best friends and is in a position here where he could be of the greatest usefulness. In fact he has already done much in the way of building up again the First English congregation in Kitchener. My prayers are that the Lord may spare him for still greater good work, but he is himself in very low spirits over his condition which is not a good sign. Prof. Willison preached for him to-day. We are still having most beautiful winter weather, bright and mild. I was out skating yesterday

with the boys, and this afternoon I took the family down except Bonnie and Robert and we had a great time on the ice. Marion and Arthur, of course, don’t skate, but they enjoyed running over the ice and trying to keep up with us while we were skating. I suppose there were over 300 on the ice this afternoon. Arthur is a great whistler and crows over Herman who can’t whistle. He gets before him some times and tries to instruct him in the art. He said to-day, “If Uncle Lynton ever comes up here I will tell him Herman can’t whistle and wont he laugh?” Little Robert is also a very bright boy and can use some pretty big words. He can say ‘dictionary’ as plain as anybody and can say ‘Kirchenbuch’ and distinguish it from my Church Book. He is also about the best one of the whole lot to carry a tune. Everything is moving along nicely at the College and the Seminary. We are getting a new student in the College to-morrow, as a returned soldier from Galt. He intends after he gets through here to study medicine. Most of our boys are, of course, prospective theological students. But we will soon have to enlarge the scope of our College. Prof. Willison has at last moved into

his new quarters in the mansion previously occupied by us. We went over and made them a call this afternoon. The house looks nice and fresh, but their furniture is not in keeping with the place or rather palace either quantitatively or qualitatively. In spite of the improvements we are highly satisfied with our present domicile, which we are gradually fitting out with the necessary furnishings. Bonnie made up some beautiful ecru scim curtains yesterday for the parlor. She likes our new piano better and better every day. At first she didn’t care particularly for the finish, but the beautifully grained and artistically matched walnut grows in one’s appreciation the more one becomes accustomed to it. I like it much better than the more common mahogany finish. Since losing our old piano we haven’t a single piece of furniture now that we had when we started our housekeeping, but nevertheless we are a great deal better off in that line now than we were, and besides have the most ideal house was have ever had. We hope you will come up this summer and see where and how we live. Well, it is getting late and I must look after my furnace and get to bed. To-morrow is coming and it is work day. So Goodnight. With much love and all good wishes, I am 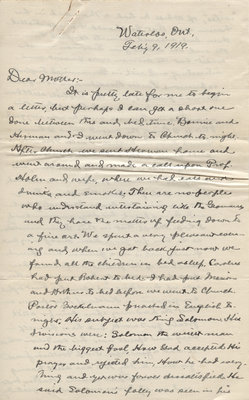