Bonnie and the boys have gone to Church and I have put the other children to bed and all is quiet. I thought therefore the time opportune for starting my letter to you. Things have been going along in their usual way and nothing startling has occurred and I haven’t anything beyond the humdrum to write, but perhaps common places are better than nothing. So here goes it. I was down at St. John’s this morning and there was another big congregation present. I came in a little late and had to go up to the [?] pew second from the front before I could find a seat. It is encouraging to see such large congregations at ordinary services and speaks well for the Church-going habits of our Lutheran people around here. But it is the morning service that is attended; the attendance in the evening is probably not over a fourth as many. I don’t think it is so much the language that makes the difference as the conservative habits of the German people.

For generations they have been trained to regard the morning service as The Service and have never come to feel the same obligation toward the evening service. We are still having comparatively mild weather. We had only one real cold day last week. That was Friday. Yesterday was quite mild and there was considerable of a thaw, making even the ice on the lake a little soft. But to-day again the weather hardened a little and the skating this afternoon was grand. The boys and I were down for an hour or so before supper. There was probably two or three hundred on the ice. The children went to Sunday School in the afternoon to-day yet, but by next Sunday the whole Sunday School will be held in the morning. We have gotten into the habit of “sleeping in” on Sunday and not having breakfast till about half past nine. We will have to get over this when Sunday School is in the morning and we have four to get off to it. Pastor Maurer’s oldest son Carl got back from the war last week. He phoned me that he was coming out to see me on Wednesday, but went on Tuesday to Toronto to see his sisters and I haven’t heard whether he has returned

yet or not. I imagine it will be hard for him to settle down now as he wasn’t a great sticker before he went. The peace conference seems to be making slow progress. It will probably be the middle of the Summer before it will reach definite results and then it is doubtful whether they will be satisfactory all around. Anyway it will give Pres. Wilson a chance to have the time of his life and a field in which to show his skill as the chief manipulator of world dealing. One will be obliged to admire him if he pulls off the Presidency of the world League of nations. I see the United States has gone constitutionally “bone dry.” One of our local papers said the other day over the stringency of the dry law that it left nothing about whiskey free to men except to think of it and that perhaps they would remedy that by an amendment. I don’t know whether Canada will follow suit or not. It is quite dry enough now under the war time prohibition law. The subject will be put to a plebiscite sometime after the soldiers are all home. The impression is that their votes and influence will go against the measure. Bonnie just came in at this point and plumped herself down on my knees. She says she like to sit on

my lap as well as ever she did. Consequently she remained there a long time and I forgot all about my letter and what I was going to say. Did the pastor whom you called from Chicago or thereabouts accept the call to Holy Trinity? It seems strange that a congregation like that should remain vacant for so long. It should teach the congregation a lesson, not to let a good pastor go so easily when they have one. I trust that things will move along more smoothly hereafter and that the congregation’s experience will not need to be repeated. Pastor Maurer is getting the work well in hand at First English and is much encouraged over the prospect. Well, I don’t know of anything else of interest, so I will close. With much love to you all, I am 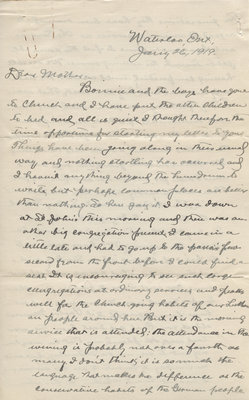