Your letters to Bonnie and to Carolus were received last week and were highly enjoyed. Especially pleasing was your intimation in Carolus’s letter that you might pay us a visit next summer, which we all hope that you will do. I intended to write to you last night, but yesterday afternoon we had Mr. and Mrs. Casselmann (Mrs. Maurer’s father and mother) over for tea. They are quite old people and I had to go over to Kitchener for them in the afternoon and take them back home after Church last night. When I finally got home it was after 11 o’clock – too late to begin writing letters. However, in spite of a very full day to-morrow I will try to write you a few lines this afternoon. We are having the most beautiful winter weather imaginable, though on account of its unseasonable mildness most of our snow has gone away and all traffic is now again by wheels. But it is easy on the

coal bin, and if this weather continues I ought to have enough coal left to give me a good start on next winter’s consumption. Yesterday morning I attended service in St. John’s. There was a wonderfully large congregation out, perhaps a thousand. Pastor Bockelmann preached on marriage from Ps. 128. As this is the second sermon on that subject I have heard on two successive Sundays, I feel that I am pretty well informed on that theme. But Pastor Bockelmann’s sermon was very good and I still remember both the theme and divisions and can give them in the German. In the evening two of our students held forth in English with missionary addresses. They were student Irschick of the Senior class and student Geelhaar of the Middlers. Both acquitted themselves quite creditably. Mr. Irschick who was in Nova Scotia last summer has been called to a German-English Church at Hespeler, about 14 miles from here. Mr. Irschick you will remember as “the Russian Prince”. On Thursday night of last week the College boys gave a sleighing party to the girls of the town who had helped them in the Christmas Pageant which they gave in the town hall here and in Preston. All together there were forty

in the party on two sleighs. The trip was to Conestogo and return and wound up with a sumptuous banquet in the hotel at Conestogo. Prof. Willison chaperoned one sleigh load and I the other. We also both shined at the toasts delivered at the banquet. The roads however were poor and it was half past one before we got back that night. But the boys and girls enjoyed it and had a lively time. The ice on the lake is quite good yet notwithstanding the mild weather. I was out with Carolus awhile Saturday afternoon. He is developing into a great skater and is much more at his ease on skates than I am. Herman is getting tired of the sport and doesn’t go as often. Carolus tells me that he stands 8th in his class of 40 at school. There is still room for improvement but this isn't bad. I am having him and Herman memorize a psalm now every Sunday before I allow them out to play. The Sunday School at St. John’s is to become English next Sunday with optional German classes and will be held in the morning. Hitherto the English school has been held in the afternoon. The morning will suit us better all around. They have a great time with Arthur down at the Sunday School. He sees Marion with her cap on and he refuses to remove his, and

neither his teacher nor the Supt. nor the pastor can induce him to remove it. Carolus says “It makes me so ashamed I don’t know what to do.” But Arthur has a mind of his own and isn’t averse to showing it. Robert talks very plain and expresses himself well. When he falls and hurts himself he says: “I hurt so much.” He is very fond of potatoes and eats more of them than I do. I said to him yesterday “Do you like potatoes?” Quick as a flash he said “Yes, do you?” He can handle the auxiliary verbs better than any child I ever saw for his age and can count alone up to ten. He likes to sing and is particularly fond of the hymn Adeste fideles. He also likes “Grandfather’s Clock” and “Mary’s Little Lamb” sung to the tune “Farewell Ladies, etc.”

I know if you come up you will enjoy my interesting family, and the children would no doubt keep you amused. You would find Bonnie quite congenial too. We grow closer to each other as the years roll along and are very happy together. She has made me a good little wife for whom I cannot sufficiently thank the Lord. But I must close. With lots of love, I am 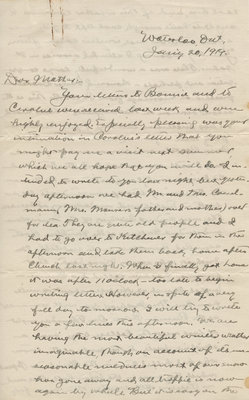