As the holidays are again about over and to-morrow we begin again the regular routine of duties, I thought I had better embrace this opportunity to write to you rather than put it off till later on in the week when I will be busier than I am now. We have all enjoyed the holidays very much, but are ready to start in to work again. In fact the older children have already made a start as their school opened up again on Friday. In the College we have the prospect of an extra student - one of our last year’s boys having given assurance that he intended to return after the holidays. We are having beautiful winter weather now. Saturday was quite cold and the thermometer touched zero on both Friday and Saturday nights. It was a little milder to-day and is quite nice because there is no wind. The snow as yet is quite thin but is packed down solid and rests upon a bed of ice making good going. As a consequence cutters are the chief

mode of locomotion and the cheery sleigh-bells are heard at all hours of the day and away into the night. New Year’s day was very rainy and rather dismal. Nearly everybody stayed at home though some found their way to Church. As we, Bonnie and I, were at Church on New Year’s eve at a German Sylvester Abend service, we did not go on New Year’s morning, but instead took the whole family upon invitation and spent the day at the parsonage in Kitchener with Pastor Maurer’s. They had a good dinner for us, the chief dish being roast beef, and we enjoyed the day very much. The boys who don’t get away from home very often nearly ate themselves sick. The storm was heavy and the wind high, so we came home before night. On the way up from the car-line, Bonnie’s hat blew off and Arthur turned to her and said, “Mother, shall I holler up to the Lord and tell Him not to do it again?” Robert was especially taken up with the street car ride and has been talking ever since about riding on the street car. Carolus took Robert out to-day for a sleigh ride on his sled. He liked it so well that he cried when he had to come in. The children

up here have good times in the winter and I don’t think they would like to live in the South. Carolus and Herman are making good use of their skates, but I haven’t got out yet. I have no shoes to fit my skates and I don’t feel like buying them for the little that I would get out. The snow is hardly deep enough yet for good tobogganing, but the children are sliding down our back steps on it to-day. I got my book case painted this last week. I think it will be dry enough to put up my books by to-morrow. It is painted cream enamel like the wood work of the room and is very pretty. It will be a great convenience to have my books on shelves again. We had a nice letter from Blanche a few days ago and I wrote her my first New Year’s letter, Jan’y 1. To-day we had communion down at St. John’s. I assisted Pastor Bockelmann in administering the communion in German. Bonnie was down at both the confessional service last evening and at the Communion service this morning. She understands enough German to get along and I think will improve in it on acquaintance and practice. Pastor Bockelmann preached a fine sermon on “The Wishes of Your

Pastor for the New Year” from the text about Simeon Luke 2:25 flg. He is a very pointed and practical preacher and I like him very much. To-night I am going to take the two oldest boys and go down to Kitchener to hear Pastor Maurer. We received a nice picture post-card of Herminie’s baby and Bonnie wrote to her the other day. We also received New Year’s greetings from Herbert and Bessie via New Year’s card. I don’t think of anything else of special interest, so I will close and mail this on my way to Kitchener. Again allow me to wish you all a happy and blessed New Year. With love from us all, I am 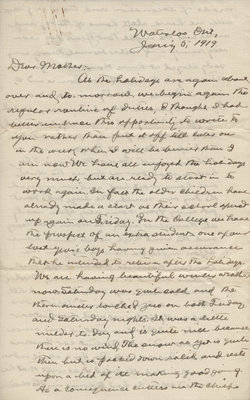