Your most welcome letter of the 21st reached me the day after Christmas. Many thanks for the handsome Christmas present enclosed. As the children were well supplied with candy and toys I did not follow out your directions in their case, but Bonnie and I took Marion down to Kitchener and I added $2.50 to it and bought her a fine overcoat. As we had previously bought coats for the boys and she needed one very badly, having outgrown her old one, I concluded that this would be the best disposition of the money. Now all the children are pretty well fitted out for the winter. We had a very pleasant and happy Christmas. We had our tree, of course. Everybody has theirs here and a family that didn’t have one would be liable to the suspicion of being half pagan. Our tree was very pretty and symmetrical and was well decorated and lighted. There were also plenty of presents for the children. Father DeLong had sent his usual ten dollars, so that the presents didn’t cost us much. I bought the

boys Hockey shoes and skates, and they have been making good use of them ever since. I was down at the lake yesterday and was surprised at the skill they displayed in skating. They can hold their own with any of the young fellows. They have been after me to go down and skate with them and I got far enough along to fasten my skates on an old pair of shoes; but I haven’t been down yet. I’m afraid they will put me to shame. After Sunday School this afternoon they went skating again and will probably not get home till supper time. The ice yesterday was very fine. The snow squalls to-day which are at times pretty heavy will spoil it somewhat I fear. But there is no doubt a big crowd on the ice this afternoon. We thought up almost to the last minute that we would have a green Christmas this year; but on the 24th we had a snow storm that left the ground nice and white for Christmas morning and it has stayed with us with a little more added occasionally, up to the present. It is rather thin as yet, however, and there are quite as many buggies running as cutters. We had a beautiful Christmas Service – German English – in St. John’s Christmas night. The Sunday School is very large, fully 500 children, and it was an impressive sight to see them all coming in. Of course only a

few of this number were given recitations, but all of ours that were large enough had pieces, viz. Carolus, Herman and Marion, and they all did splendidly. I was down and also to the German Church Service in the morning. They had two trees beautifully decorated and lighted with electric lights. These trees were still standing at the service this morning. I received a pipe and two small boxes of cigars containing 24 in all, of which I have perhaps a half dozen yet. Bonnie got a number of useful presents, which she may describe to you sometime. We had a fine goose weighing 7 ½ lbs. So we didn’t miss your good fat hen or rooster or whatever it was. I like goose better than turkey and it is the popular Christmas fowl around here. Turkeys are on sale only when specially ordered beforehand but geese were in great abundance on the market. The Seminary Board held its quarterly meeting on Thursday the 27th. The Board expressed themselves as highly pleased with my management of the institution and heartily congratulated me on my success. Pastor Bockelmann told the Board that I made the best speech of any of the ministers at the Waterloo peace celebration and that I had made a fine impression upon the public.

In the vacancy of the English secretaryship I had to act as Secretary of the Board at its meeting. Pastor Bermon of Morrisburg was at this meeting elected a member of the Board. We will therefore probably see him hereafter about four times a year and have the pleasure of entertaining him. We will have two graduates from the Seminary this year. Both have been called to congregations near here, the one to the Conestogo Parish and the other to Hespeler. They are both excellent men and will make fine pastors. They will have German English congregations in the Canada Synode. I trust Clarence’s and Blanche’s children are all well of the Flu by this time. It seems to hang on a long time down you way. There are certain communities around here also where it has returned but there have been only occasional and scattering cases in Kitchener and Waterloo. We haven’t our piano back yet. It seems to be taking a long time to repair it. Tell Clarence if you can get word to him that I will return the $35 borrowed as soon as I am paid up by the Kitchener congregation. They still owe me about $125.00. We will have one full week’s vacation and I feel that it is a good long rest that I have had already. I am enclosing Carolus’s letter, also program of Christmas service. With love to you all and best wishes for the New Year, I am 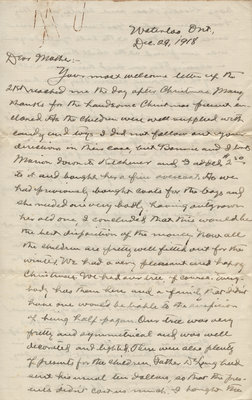