As it has been just a week since I wrote you last I will try to give you a few lines again to-night. I have just got back from Prof. Lincke’s where we had another session over the German English Catechism of the Canada Synod and as I was anxious to finish up the job I stayed over till late. Hence I haven’t a great deal of time before the hour of retiring in which to write and will therefore have to be more or less brief. We have been having quite spring like weather again for a few days with now and then April showers, and I have been very busy digging in my garden and planting seed. The garden is a large one – the biggest I have ever had – and has to be spaded up first; which is rather slow work. However, I have been getting along quite famously and have about half of it spaded and the following seeds planted, to wit: Lettuce, onions, pease, cabbage, salsify, parsnips, and perhaps one or two other things that I don’t remember just now. I intend to plant yet corn, beans, cucumbers, cauliflower, potatoes, pumpkins and leeks and endives. If

they all do well we ought to be able to live through the summer and fall at any rate. We have raspberry bushes and strawberries also in the garden and rhubarb. The garden should be a great help to us in these hard times when they are putting new regulations and restrictions on everything which we have to buy. It is terrific the way things are going up in price. I don’t see how common people are going to live much longer at the rate things are going. I thought it was about the last straw this week when tobacco took a jump. On a 45₵ can less than two weeks ago the price I had to pay the other day was 55₵. And so it is on everything. But I suppose we shouldn’t complain, seeing it is all supposed to be for the good of the cause. I preached last Sunday night in St. Matthews Church, Kitchener and will receive $5 for the service when it comes in. Next Sunday I am to supply for Dr. Hoffemann in Toronto. I will probably get $10 for that, which will give me 5 dollars or a little better clear. Every little helps in these [?] times when money goes so short a distance in purchasing power. Dr. Laury, who is at present engaged in the service of the war commission, has sent in his resignation as President of the Colleges and Dean of the Seminary to the President of the Board. The Board will hold its meeting

to act on the resignation here on May 7. It will undoubtedly be accepted. I don’t know what they will do to fill the vacancy thus created. They may offer me the job. I am not anxious for it, as I would rather be free from the responsibility it involves, but if they offer it I will not push it away. On the other hand I will not make any move toward it or feel disappointed if it should not come my way. The chiefly desirable thing about it would be the increase in salary which would be most acceptable. I had my doubts when Dr. Laury left as to whether he would ever be back again, as he took all his books and belongings with him and left nothing behind. But he never said anything. He is as close in that respect as your ex-pastor Murray is. The Board will have to secure two new men next year, one for the College and one for the Seminary; and owing to war conditions the prospects are not very bright for either of these institutions. It seems that this terrible war daily grows worse and more burdensome. I sometimes wonder how long the nations are going to stand for it. Carolus is well again. I doubt if he had the mumps. I think it was only trouble of a glandular

nature due to a cold. We are still keeping the children home, but none of them have shown any symptoms or sign of the mumps. They are having great times playing out in the yard these days. Even Robert is out nearly all day. Our grass is green and almost in need of mowing and the trees are beginning to bud out. The birds keep up a regular chorus in our spruce grove, but we haven’t the variety of birds that we had at Morrisburg. Here we have only blackbirds and robins. Bonnie received the music Pearl sent her and thinks it very fine. She will write Pearl in a day or two. She is through with house cleaning now except the cellar which she proposes to do yet this week. But I must close. With love to all, I am 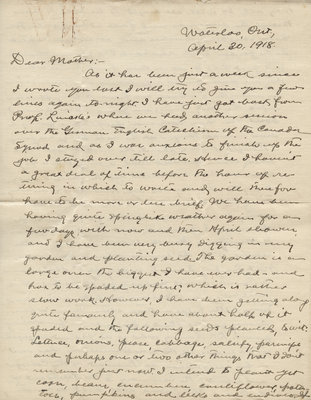