Creators
Carroll Herman Little, Correspondent
Candace Little
, Recipient
Media Type
Text
Item Type
Correspondence
Description
Handwritten letter from Carroll Herman Little to his mother on December 31, 1917. Little describes family life with wife Bonnie and their children; his work as a Lutheran pastor and faculty member at the Evangelical Lutheran Seminary of Canada in Waterloo, Ontario; the coal shortage; the possibility of sending his wife and children to relatives until the winter is over; and the family's Christmas and New Year celebrations.
Notes
Carroll Herman Little (1872-1958) was a Lutheran pastor, and a professor and administrator at the Evangelical Lutheran Seminary of Canada (later Waterloo Lutheran Seminary; now Martin Luther University College) in Waterloo, Ontario.

This is New Year’s eve and I thought I would celebrate it by writing a letter to you. There was service in St. John’s church to-night and I had intended to go, but by the time I had supper and looked after my furnace I found it too late and had to forgo the privilege. The service was entirely in German but I can understand it sufficiently to take part in the liturgy and to take in the sermon. There will be a New Year’s service to-morrow morning which I may attend. I went there to Church last night. The service there was in English and I was quite surprised at Pastor Bockelman’s ability to handle the English. He preached a really good sermon and used splendid English. In the morning we attended Pastor Behren’s Church in Kitchener, but I found it too cold to go down there again last night. We have been having extremely cold weather for several days. It was from 10 to 15° below zero the last two or three nights and the thermometer did not rise above zero any time through the day either on Saturday or on Sunday. To-day was a little milder though it is still quite cold. Bonnie went over to Kitchener to-night to attend a

violin concert by some notable or other. She will be back next year at about 12:30 o’clock. We are all having a pretty serious time at present on account of the scarcity of coal. I got a little over half a ton last Friday and on account of the severity of the cold I had it nearly all burnt up to-day. I succeeded this afternoon in securing a half ton more, but this will only last a few days. The last dealer told me to-day that he could not possibly supply all the people and that the one thing to do would be for lots of people to give up their houses. I was thinking to-day that I might have to give up house keeping for the winter and send part of my family away. My plan would be in case it came to this to keep Carolus and Herman with me so that they could continue in school and send Bonnie and the other children either to her home or somewhere else for the winter. The boys and I could then get a room in the Seminary and board with the club. This is of course, assuming that we can get coal for the Seminary, which is also problematical. At first I proposed to send Bonnie and all the children to the country near Morrisburg and board them among some of my former parishioners, but she would not hear to that. I don’t much like the idea of sending them to her home on account of Lynton’s

tubercular condition, but she could spend most of the time in St. john with her sister Mrs. Gunn, unless some of you could take them for a couple months. The soft water pump and all the pipes in the kitchen froze up Sunday and we have not been able to thaw them out yet so that we have to go up stairs for all the water we use and can do no washing on account of the hardness of the water. We never had such a trial as we are having at present and there are thousands of people in western Ontario in similar of worse plight. I was down to see the coal dealer to-day about coal for the Seminary. He promised to send up a load this afternoon, but didn’t do it. The boys will be returning to-morrow evening and as that is a holiday no coal will be delivered and they will meet with a cold reception. Besides one of the pipes in the building froze and burst. I sent word to the plumbers to come up and repair it to-day and they promised to do so, but they too failed to keep their promises. I telephoned the coal dialer Saturday about the coal and told him I had to know as I had to notify Dr. Laury and the boys in case we didn’t get any in, and he told me to tell them to come on as he had received several car loads and

would be able to supply us. Now to-day after I had notified Dr. Laury and when it is too late to recall the notification he puts up a different tale. It is a very serious situation and I hardly know what to do about it. The Christmas services came off last week. Carolus mailed you a copy of the service they read in their Sunday School and Christmas night. We mistook the hour of their service and he got in too late to say his piece but Herman got his off very nicely, so Bonnie says who attended with them Pastor Behren's service was held on Wednesday night. The children did their part well and spoke their pieces fine, but he added a tableau of the nativity which I think was simply awful. They had a real baby, and a girl at that to represent the Christ child in the manger and had impersonations of the Virgin Mary and Joseph, of the of the wise men from the East and of Christ blessing little children and even of the star of Bethlehem moving over the manger. All was crudely done and the wigs and costumes were ridiculous and grotesque. The stars of Bethlehem also went out before it reached the manger. It was considered a great hit and was repeated on Friday night though with what success I did not hear. The whole thing to my mind bordered on the sacrilegious and was wholly out of place any where and especially a Church.

The tree and decorations, however, were beautiful, the lighting being all done by electricity. They go to great elaborations in the decoration of the Christmas trees here. I didn’t get very many presents this year, but sufficient. Besides the pair of gloves that Bonnie gave me, I received a small box of fine cigars from Mr. [?] of Morrisburg and a book from father DeLong. The children have been having great times with their toys especially with the toboggan. We don't have much snow, but enough for tobogganing in the back yard. Mr. Hirtle came back to the Seminary from his Christmas vacation in Toronto this afternoon and we took him in. He is here with me now. I am to meet Bonnie at the car at 12:30. It is now a quarter till 12 o’clock. 1918 - the bells are ringing and whistles blowing all over the twin cities announcing the birth of the new year. I send you my greetings and those of the family for a bright, prosperous, happy and blessed New Year. I pray also that it may be a year that will bring peace to the poor war distracted upset world. I am reminded of this by the firing of guns by which the incoming of the new year is now being ushered in. With all good wishes, 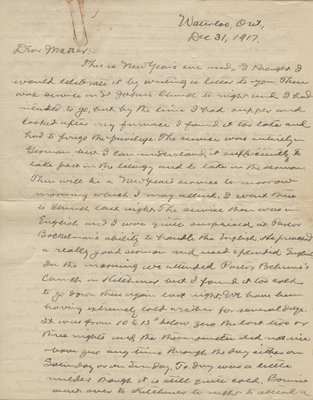