I had intended to write to you last night but we had such high wind and it was so cold that I couldn’t keep my study comfortable enough to stay in it and didn’t find it very convenient to write elsewhere. So I put it off till to-night and from Tuesday night till Thursday night inclusive my time is pretty well occupied till high bed time i.e. eleven or twelve o’clock. Saturday and Sunday we had the heaviest storm of this season. It snowed for two days and the snow was accompanied with very violent wind and severe cold. Sunday none of us got out to Church at all except the children who went to Sunday school in the afternoon. It kept me busy all day keeping the fires going and shoveling the walks open. It was the busiest day of manual labor I have had this long time. In one week from to-day I burned one ton of coal, $9.50 worth. I am altogether out again but succeeded in getting another half ton from the dealer which I expect will be up early in the morning. In a big house like this it takes an immense amount of fuel to keep it warm in winter. The Board

however has promised to stand the expense of all but eight tons and I think I have already burned about six. But as I have been using furnace coal also for the kitchen stove I will have to pay for a couple more tons. The coal is still very scarce, but the dealer thinks he will have plenty before long as navigation is now closed and shipment by boat has ceased. In Kitchener they have no hard coal at all at present. I am so situated here that if I do run out I can borrow from the Seminary by carrying it over as I have done a few times already. I suppose you have read of the awful tragedy at Halifax. It seems to grow in magnitude with later accounts. Two of the still missing victims were Mr. Wm. Hirtle and son Carl formerly of Mahone Bay and my parishioners there. They are the uncle and cousin respectively of Mr. Hirtle senior in our Seminary. So far these are the only names that I knew among the dead in Halifax though I imagine the young [?] of Mahone Bay who was killed was Mr. Bertie [?]’s son, also one of my former parishioners. We have heard no word from the Weavers, though Mr. Hirtle tells me that they were outside of the danger zone and probably therefore safe. We haven’t heard whether the Church was badly damaged or not, but

it is likely that it was, as it is in the district that was hardest hit. It will be a sorry Christmas for Halifax and its people. I don’t think a greater disaster ever befell an American city. It is now less than a week till our election which will be held on next Monday. I don’t know, but it looks now as though Laurier will win out. You will probably hear the result before my next letter arrives. People are becoming restive under the inflation of prices which makes living increasingly harder and there is a silent sentiment against conscripting young men for fighting in Europe which the government will find it exceedingly difficult to overcome. However, we will soon see how things will go. Time flies very rapidly here at the Seminary. Where one is so busy the week is gone before he knows it. I like the work very much and have reason to think that I am giving general satisfaction. Christmas will soon be here, but we have no vacation, only from Friday before till the day after Christmas. However this is long enough, as I have no place to go and very little money to spend. The children are all well. Arthur didn’t go to Sunday School Sunday on account of the snow storm. He is the sturdiest lad I have. Little Robert doesn’t talk yet except an occa-

sional word now and then; but he understands everything you say to him. He is a very sweet little child. I suppose I will have to stop here as I have one more lesson to get up to-night and it is already late. With kindest regards and best wishes I am 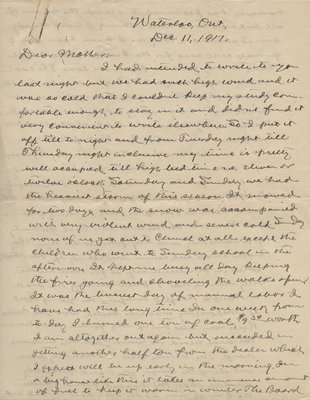