We had our Luther League last night and as it was nearly eleven o’clock when we got home I found it too late to write you then. As I have Lenten Service to-night I will try to get in my letter beforehand. We have been having some very fine weather lately, sunshiny and bright, but still too cold for the snow to melt much. To-day we are having it somewhat cloudy and colder and it looks as though it might snow by night. We had a heavy snow storm all day Sunday again. It was like the storm of Monday a week ago and piled the snow up in great drifts. It was all I could do to get through to the lower Church Sunday afternoon but I made it, though not many others did. I had 13 out including my two boys. In the morning I had 24 out here. In the evening after the storm had somewhat abated and the side walks were ploughed out, I had a congregation of 45 or 50 out. Yesterday the ice began breaking out of the river. I saw one cake go down that must have occupied an acre in area. The snow is beaten down somewhat in the roads, but is still very deep elsewhere.

It is over the picket fence in our garden. Pastor McCreery was out here yesterday and took supper with us. He has resigned Dunbar and will leave there the first of May. If he does not go to Ottawa he will go to Pa. in the vicinity of Phila where Dr. Kunzmann has a mission for him. He and his family are coming in for considerable money from his wife’s estate. The estate had never been divided since her mother’s death but was kept together for the six direct heirs. For the farm which lies on the outskirt of the city they have been offered $80000 and they own besides almost a whole block in the city, so that the estate is worth well over $100000. The latest about Ottawa is that Dr. Kunzmann is recommending a student from Mt. Airy who is Canadian born and who graduates this year. So Bro. McCreery may be knocked out at Ottawa. We still have our girl and she is proving out fine so far. She is quite refined and the children all like her, especially Arthur. He says he is Lyra’s (Lena) boy and when I get after him about it, he says “I’m father’s and Lyra’s boy.” It is quite a relief to Bonnie to have a girl and gives her a chance to get

out now every day, and also to the Church services. The children are getting better of the whooping cough gradually though they have pretty hard spells yet some times. Hope Cecile and Walter will soon be well of the measles. I see from the papers that the U.S. is drawing nearer and nearer into the war. The arming of merchant ships and the instructions given the gunners can mean nothing else. China also is expected to follow the lead of the U.S. If it keeps on much longer there won’t be many nations left out. I read with much interest Dr. Gruver’s informal notes in last weeks Survey in which he argues against the U.S. going into the conflict. His position is I think thoroughly sound, but it will not avail. The entrance of the U.S. will at least for a time make matters a great deal worse. All restraint will be removed and the warfare on sea will be more savage than ever. But I must close. With love and all good wishes I am

Congratulations to Herbert on his birthday – 41st, I believe CHL. 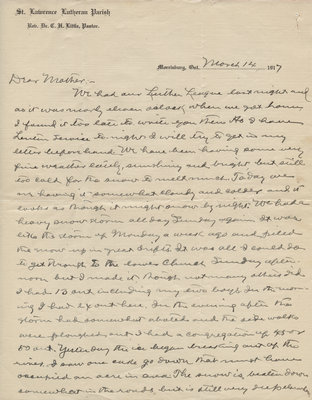