Your nice newsy letter of the 12th [?] arrived a day or so after I wrote you last week. I will see what I can do toward answering it this afternoon. We have been having very steady winter weather since I wrote you last, every day alike fine and cold. There has been no more snow here, though I see from the papers that New Brunswick had 14 ½ inches of snow a couple days ago. Some people here try to drive cutters still, but it is a scraping and a trying process for man and cutter and beast. I did not go to Ottawa last Sunday. I got a letter from Pastor Maurer Thursday evening that they had arranged to have service there on the 24th instead of the 17th. It was just as well that I didn’t go as I had a funeral out in the country seven or eight miles back on Saturday. It was that of an old lady, 78 years of age. On Sunday I made my regular appointments as usual and on Monday I drove out to Dunbar to assist in the funeral of Mrs. McCreery who died on the 15th. Pastor Maurer preached the sermon while I conducted the Liturgical Service. After the funeral the body was brought out to Morrisburg whence it was shipped to

Allentown, Pa. accompanied by all the family. Pastor McCreery will stay over in Pa. five or six weeks, and when he comes back I think we (i.e. the Synodical Mission Committee) will place him in Ottawa for the winter. In the meantime pastor Maurer will look after the Dunbar Parish. Pastor McCreery is not sufficiently strong in the pulpit to take charge at Ottawa permanently, but he can hold the Mission together for the winter, and I hope that we will be able to supply it with a permanent pastor by next summer. This arrangement will also no doubt be of benefit to Pastor McCreery in taking his mind away from his trouble and the place associated with it. Mrs. McCreery’s funeral was quite a large one. The corpse was conveyed to the station from Dunbar in an automobile and there were five automobiles in the procession. After my labors from Saturday till Monday inclusive I was very tired and felt pretty well exhausted yesterday, but have recuperated to-day. I am not as young as I used to be, but I still recover from extra exertions after one day’s rest. I had intended to use one old sermon at Ottawa. So up to Friday I had only pre-

pared one new one. Then when I got word Friday morning of the funeral Saturday I had two new ones to get up in less than a day and a half. But I was equal to the emergency and got through all right. Pastor Maurer wanted me to go to Ottawa this coming Sunday. But as I have my Christmas service Saturday night in St John’s, I told him, it would be impossible. He then agreed to go himself provided I would preach for him on Sunday morning, which I consented to do. This will give me another pretty hard day as I will have communion in St. John’s in the afternoon. I had to post pone my Christmas Communion here for the following Sunday. Our Christmas Service here will take place on Christmas night. Carolus is again enclosing you a letter. He is great on letter writing and doesn’t do too bad for a tyro. You will notice he is not always absolutely correct on spelling. Often he prefers the revised form. The boys were tickled over their letters and especially over their enclosures which were like opening prize packages to them. They each spent their money on a slate. Bonnie got my Christmas present for me last night and I am already wearing them – a handsome pair of

bed room slippers. I had her father’s picture framed for her and she already has that hanging up too. Father DeLong sent us a P.O. order for $12, $2 apiece for the children and for me and The Ladies’ Home Journal for Bonnie. My portion was for the purchase of smokes, he said. I haven’t invested yet, however. We are getting a nice doll carriage for Marion and toys mostly of a warlike nature for the boys. Soldiering is the most popular juvenile play at present. I was sorry to hear of Sam Rhymer’s tragic taking off. It was the first you had written about it. It is clouding up this afternoon and I think we will have snow by to-morrow. It will be much better if we get enough for sleigh roads. The boys are about well of the Chicken pox and are going out again. Marion and Robert haven’t taken them yet. Robert, I think, will be musical. He always sings when I walk or rock him to sleep. Arthur picks up the boy’s Christmas pieces and can sing the song almost as well as they can. Well, wishing you all a most merry Christmas and all the blessings of the joyous season, I am

Bonnie sent you yesterday some insertions for pillows and sheets, I think it was. 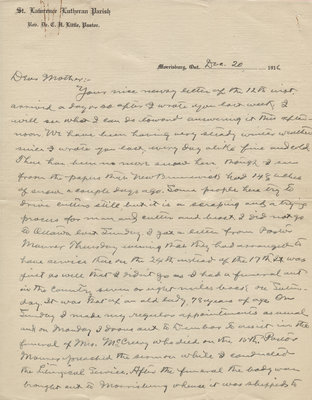