As I didn’t get around to writing you last night, I will try to drop you a few lines to-day. We are having very cold weather now. Night before last it was 4° below zero and was considerably colder last night. We had snow Monday night and squalls of it off and on since. There is a depth of four or five inches of snow and some are using cutters but the snow is so dry that it refuses to pack and in such snow the cutters are rightly named. I drove up the river yesterday but took a buggy and I’m sure I made the wisest choice of a vehicle. The whooping cough, mumps and chicken pox

are so prevalent now as almost to break up the schools and to interfere seriously with our Christmas programs. I was in a house up the river yesterday where they had nine children and every one was down with the whooping cough. Carolus and Herman have been out of school all week on account of the chicken pox. Arthur also has them, but none of the children is sick with them. The only trouble is that we have to keep them all in the house and they get restless and into all kinds of mischief to the great annoyance especially of the housewife. I hope, however, that they will escape the whooping cough. I don’t mind the chicken pox and the mumps, but the whooping cough would likely drag along all winter.

News reached us night before last of the serious illness of Mrs. McCreery. She never recovered from the fall in which she broke her leg in Montreal and lately dropsy has set in. Last night Pastor McCreery phoned in that she was sinking rapidly and would probably not live through the night. I wouldn’t be surprised to get word this afternoon that she is dead. The children were all summoned home this week, and Mrs. McCreery’s sister also came. It will be a rather sad Christmas for them. Sunday I am to go to Ottawa again. I will probably leave here Saturday morning. Our girl is gone and we are alone again. Bonnie thinks she can get along by having the washing done out.

I see the German chancellor has put forth peace terms.

They are, however, not acceptable to the Allies and are ridiculed unmercifully by the papers which say that no terms will be accepted by the Allies save such or they shall themselves dictate. But if matters keep going as they have been lately the terms offered now may be better than those they will get later on. There is a deeper feeling of pessimism now than at any time since the war began. The only hope is that Lloyd George will be able to accomplish what the Asquith regime utterly failed to do. Our 154th battalion has been broken up in England and is being sent in drafts to fill up the broken battalions already at the front. The thing will have to be compromised in the end and the issue to be faced is why not now? But I must close. With love I am

[Written on the side of the letter]

“The Birth of a Nation” was shown here Tues. night. Bonnie went to see it and was much taken with it. CHL 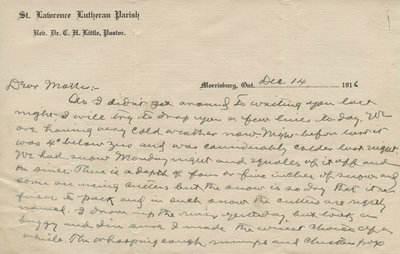