I will try to write you a few lines again to-night. We are at present having very wet weather. It does not rain hard, but there has been a steady drizzle for the last two days and nights and the temperature is very mild. This soft weather followed a cold snap that culminated on Sunday and made one feel that winter was already upon us. Since then, however, I have had a hard time holding the fire down low enough to keep us from steaming. I don’t know but I think I prefer the cold weather and the frost to the unseasonable warmth and the mud. But we will likely have a change again by the last of this week. Carolus said his teacher made out the honor roll to-day and that she told him that he headed the list this month. Herman is sending you in this letter some of his writing. I think he does quite as well as Carolus did at this time last year. He is a bright boy and is constantly picking up some new big word. The other day he said to his mother, “I know what ‘contradict’ means. If the teacher says some thing and I say ‘That’s not so”, that is contradicting.”

Yesterday he came into the study and said “Father, I know what ‘interrupt’ means. If any body says anything and you speak in that is to interrupt”. I think he will make the honor roll this month too. Arthur heard them talking about the honor roll to-night and he said “I’m on father’s honor roll”. He is the heavy weight among the boys, short and stocky. He can talk about everything and is a great father boy. He is Minnie’s favorite. She is going away Friday morning. I have a girl coming Monday. If she proves satisfactory, as I think she will, it will cost us more but will relieve Bonnie more than Minnie was able to do. We are to pay the girl $2.50 a week. Bonnie put Robert in short dresses to-day and he seems to enjoy his new freedom. He is the most incessantly active lad we ever had. I think he resembles Carolus somewhat, at least he is built on Carolus’s lines – long and slender. Marion takes care of the baby a good deal and is quite a motherly little girl. She is so anxious to go to school that I think we will start her next fall. I ordered our Christmas Services this week and expect them here to-morrow or Friday.

Carolus and Herman will probably take parts in them this year. Everything is so expensive that I’m afraid the children will have to do on small gifts this year. Eggs are selling here now at 50₵ a dozen. Dr. Bieber has been ordered by his superior Dr. Kunzmann to vacate Montreal and come to Phila by Jan. 1. He has applied, however, to be allowed to stay till Jan’y 21 in order to confirm his catechetical class. Dr. Kunzmann and the Board had provided Rev. Lamartine to take his place; but President Maurer proposes to protest the Rev. L’s coming as he is one of the pro-est of pro-Germans in Pa. and would kill the mission and perhaps get our whole synod into trouble. The Danes in Montreal have it in for the Germans and are even more bitter against them than the English are and it would never do to put a German minister in a congregation like that. In Ottawa the Danes generally are as a rule rather sympathetic with Germany. I wrote Herbert yesterday another proposition with reference to Ottawa and hope he will be able to see his way to accept it. He could try the thing out for four or five months

and I think he would enjoy the work there. In the mean time if he didn’t want to stay long, we might be able to get a permanent pastor for Ottawa.

I see from the papers that it looks pretty bad for our latest ally Romania. It looks as though she would go the way of Belgium, Serbia, Montenegro and all the other small states of which we are the champions. But it isn’t our fault. We are doing the best we can for them. The Germans seem to be plying their submarine warfare with a vengeance again. We are living in hopes that they will still come to the breaking point with Uncle Sam. The English, however, are getting on their Zeppelin raids and these are likely to be fewer and far between in the future. How is Pastor Murray now. I hope his health is better and that he is getting along handsomely. Give him my kindest regards and best wishes. With love to one and all,

Herbert + I read this one- 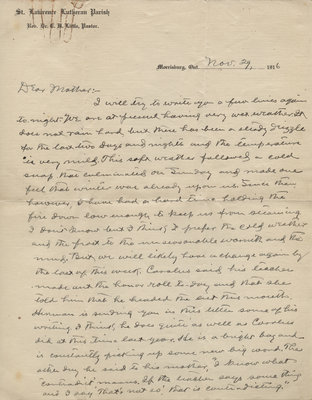