This meeting was unique in that all were speakers were ladies.

Opening Devotions were in charge of Mrs A. Jacobi whose scripture lesson was taken from Romans 12 after which she offered a very suitable prayer.

Mrs Creager spoke to the assembly on “Christian Loyalty”. The speaker defined the name Christian and set

before us a 4 fold standard which is required of all christians 1. Make larger use of our Bibles 2. “To be witnesses for Christ” by telling to others the precious values we have found in Christ. We can be real channels. 3. “Practice Christian Love” by showing a daily attitude that is kindly and helpful. 4. Christian Stewardship, an all inclusive attitude. We belong to God, all we have and are comes from God and he expects us to put our talents at his disposal. No talent is too small or insignificant to be overlooked. If you cannot be a Light House be a Tallow Candle said the speaker. Do we give enough time to Christ’s work and if we are real stewards we will give not only of our time but also our money. Don’t put off until tomorrow serve to-day.

Mrs Leupold of Maynooth, a graduate of Waterloo College told of the work of her husband and herself in their Parish at Maynooth and Pleasant Valley. She told of

how the children of the parish travel for 3 hours and more by foot or on horse to attend the church school. Many of the children there have no schooling whatsoever and all they know is work. This is one phase of the work that they are trying to stress, that is to see that the children will learn the three R”s.

The President welcomed the members to meeting after which the Secretary read the constitution followed by the minutes of the last annual meeting. Cd.

A minute’s silence was observed in memory of Dr Clausen and members of our Auxiliary who in the past year were called out of Time into Eternity.

The Treasurer had a most gratifying report which showed an increase over 1942 receipts of $451.38. The report was adopted on motion of Mrs Lotz seconded by Mrs Conrad. Carried

The President have a report of what has been accomplished during the past year in regard to improvements at Waterloo College and told the members of our contemplated improvements for this year.

[written in ink in the margin]

A report was given by the President regarding the contemplated “Girls Dormitory” and in this connection Mrs Gillespie and Mrs Conrad were re elected as the representatives of the Auxiliary on the committee who are investigating the work, on motion of Mrs CH Doerr seconded by Mrs McIntosh Carried

The nominating Committee thru Mrs CH Musselman read the resignation of Mrs LH Kalbfleisch as Treasurer and Miss DE Zimmerman as Secretary and presented the following slate of officers which was accepted in its entirety.

Mrs C.S. Roberts being in the chair for the election of the officers

Mrs J. Conrad moved a vote of thanks to Mrs Kalbfleisch for the work she had done and time she has given to the work of the Auxiliary. The meeting gave her a hearty clap of hands. The nominating committee or Mrs Quehl, Mrs Meyer, Mrs Graber, Mrs W. Bitzer.

-Open House- was held on Oct 16 at 3 P.M. About 150 guests came out in the down pour of rain to inspect our dormitories, kitchen, etc. Refreshments

were served. The donations amounted to $16.00 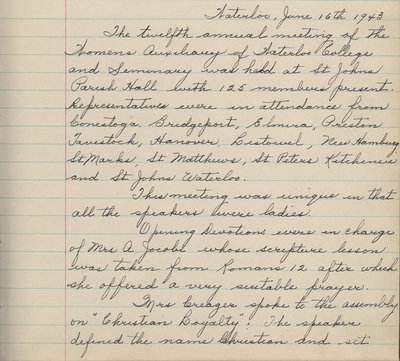