I haven’t written a letter yet this year and if I get this one done to-night you will have the honor of getting the first one. We are having a very broken winter so far and very mild. The thermometer hasn’t reached zero or been anywhere in the neighborhood of it this winter as yet. We have also had a good deal of rain, reminding us of Nova Scotia weather; but for all that the sleigh roads haven’t failed us since the first snow fell. To-day it rained nearly all day and made the roads and side walks very icy. To-night it is turning colder and there is a very high wind. It will probably be quite cold by morning and we may have some more snow. Last winter around this time we had it very cold around 30 below zero if I remember aright. To-night we were to have had our annual congregational meeting; but as there were only eight out alltogether, we post-poned it until Sunday night after service. There is a great deal of sickness, principally La Grippe, in the town, country and congregations. It amounts well nigh to an epidemic and there are few households where they didn’t have it.

Fortunately we have escaped so far. Mr. Hirtle left us Monday morning for the Seminary at Waterloo. He seemed to have enjoyed his stay very much with us. He spent Friday till Monday morning with Pastor Maurer and preached for him Sunday night. Pastor Maurer said he preached well and made a good impression. Carolus has advanced another class in school, he tells me, and is in class 4 now. He has caught up with a little girl, Lois Stoney, who lives next door to us and who started to school last winter. He has headed the honor roll in his class every month since he started to school. He hasn’t missed a day or been late and is very anxious to keep up his good record. I had very small congregations Sunday, partly owing to the prevalence of grippe and partly due to the heavy roads from the snow which fell Saturday night. I had only about 35 here and 15 below – the smallest congregations I have had at any time, I believe. One of my Christmas presents is still on the way. Pastor MacIntosh sent a Christmas box to his father and sister, shipping it from Norristown, Pa. Dec. 10 and it hasn’t arrived yet. They told me that he said he had a present in it for me – tobacco, they weren’t sure whether it was a box of cigars or a humidor of smoking tobacco. I hope that it will not go altogether astray.

I haven’t written to thank Clarence yet for his present of a box of cigars, but I will try to get around to it before long. As it was registered and I signed the return card in Waddington he knows anyway by this time that I got it.

It is perhaps a little late in the season, but we wish you all a bright prosperous and happy New Year. I hear that Dr. Kruzmann has secured a man temporarily for Halifax and will release Rev. Bieber for Montreal and Ottawa for awhile. This will relieve our situation somewhat though the man he is putting in Halifax is said to be a poor stick. Bonnie says she is planning to write to you soon. Well, I must close. With love to you all I am 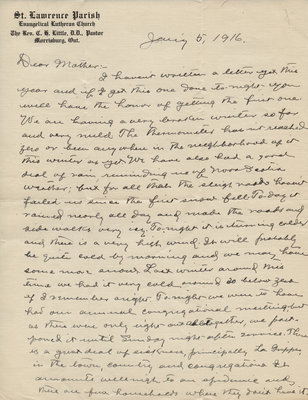