Your kind letter was received in due season and read with pleasure, and I want to thank you again for your handsome present of five dollars contained in it. I took the liberty of putting that on my present to Bonnie – a writing desk which cost $10. We received presents almost innumerable. I can’t begin to tell you of them all. So I will leave that for Bonnie to write who has more of a mind for details. But I will say for myself that I received altogether three boxes of cigars, $10 in cash from St. John’s congregation, and a nice private communion set from Bonnie. We had our first Christmas Service in St. John’s Christmas eve. The weather was fairly cold and owing largely to prevalence of la grippe, the congregation was not very large, but we had a nice service and realized $7.00 in offerings for the Orphans’ Home. Carolus was down, took part and acquitted himself quite creditably. Saturday started off a typical Christmas day with a wild snow storm. In the afternoon, however, it began to rain and kept it till late in the night – when it turned colder and snowed some more. It was a desperate night for our service here and only a few were out but the collections amounted to $7.25 for the Home. Carolus spoke here also and did remarkably well. On the 22nd we had a wedding here in the parsonage which brought Bonnie $5 – enough to pay for my present.

Sunday was fine and somewhat colder. I had my regular Church Christmas Service with communion on Sunday in both Churches. The attendance, however, was small in both cases. In St. John’s I had confirmation and confirmed a class of four, two boys and two girls. In the evening Mr. Seward Hirtle preached for me here. So I got off pretty light that day. We had a big turkey dinner on Christmas day, and a man who attends the lower Church brought me a present of two fat fowls which made us a dinner Sunday and Monday. The children were well provided with presents, candies, nuts, etc., and we had a beautiful [?] tree for them which they very much enjoyed. The weather has been the mildest for Christmas time that they have had around here for years, they say. But to-day it became quite cold and a fine snow started in again to-night. Bonnie and I and Mr. Hirtle were down in the lower congregation for tea and just got back a few moments ago. Mrs. Casselman is still alive but that is about all. I was up to see her Monday night. She couldn’t raise her head off her pillow then. I don’t think she can last many days yet. Mr. Hirtle is still with us and seems to be enjoying himself. We were fortunate in getting the loan of a maid during the holidays – an English girl Hannah Jones by name. Her mistress went away for a couple of weeks and wanted us to keep her till she came back. She is a most excellent can capable girl and is fond of children. It has helped us out considerably in this busy time. The other morning Marion hit Herman on the head with her little flat iron

raising a lump. Herman came up to me crying about it and I didn’t pay much attention. Finally he said “Father, if I were father and you were a little boy, and Marion hit you like that I’d give her the dickens.” I couldn’t resist the appeal for justice so pointedly made, and did. We received it seemed hundreds of post cards and greetings though I didn’t write many owing to the excessive postage. We appreciated very much the handsome number of the [?] Mabel sent us. I took the paper up till last fall, but found it too dear to continue it. I received Herbert’s letter. I was sorry he could not make up his mind to consider Ottawa seriously and so was President Maurer who said he would like to have had him; but if there is prospect of his reaping the fruit of his labors at Lenoir, it would be a pity for him to lose it at this date. I trust you all had a very enjoyable Christmas and we certainly wish you a blessed and happy New Year. With love and all good wishes I am 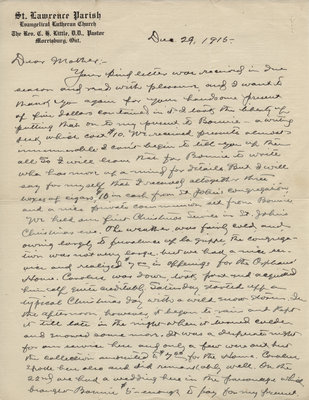