Meeting was opened by the singing of the National Anthem after which Rev Roberts had a Scripture Reading followed by a prayer.

Rev Treusch of Milverton, a

graduate of Waterloo College was the Guest Speaker. In his remarks he pointed out to us the place that women at all times held in the work of the Lord. He stressed the fact that we all have experienced the love of God and that He has created an impression within us and if so there would follow the attendant expression of love which we can & do most often show by our work for the Lord. He commended the ladies for the work done in the past as he, as a former student, could speak from experience, and hoped that we would continue the good work.

Rev Roberts as chairman of the Board of Governors also commended the ladies on their work. He gave a short resume of the work done & gave a few high lights of the present financial situation of the college & Seminary. He also sent out a plea for new students especially young ladies since we all know that young men of college age

are being utilized in the Service of Our Country.

Mrs Gillespie, our President, in her opening remarks mentioned the illness and confinement to the hospital of Dr Clausen the President of the College and Seminary. Reference was also made to the passing of one of our faithful members – Mrs Veit.

Mrs August Neudorfer, Missionary on Furlough next spoke briefly. She expressed her gratitude at being present and thanked all the members for having made her family feel so very welcome & stated that she always thought of Waterloo as her home.

The minutes of the last Annual and special Executive Meetings were read and adopted.

Letter of thanks was read from Jack Zimmerman of Milverton who was the winner of the Auxiliary scholarship.

For the members who had not

At this time the President gave a report of the contemplated improvements to the furnishings and interior of the college. The work will entail considerable expense but it is hoped that some money will be available to the Board. In this connection the following motion was adopted after having been moved by Mrs CH Doerr and seconded by Mrs J. Conrad “That we give to the Board of Governors all the money we can after taking care of our expenses in connection with the re decorating & refurnishing program.

of Synod. On this account it was suggested that all congregations or Societies be advised to specifically ear mark their givings as “Women’s Auxiliary Waterloo College & Seminary” and thus assure the moneys getting into our hands.

Copy of a motion passed at a recent joint meeting of Seminary House Committee & Women’s Auxiliary was read. This dealt with the matter of investigating the possibility of securing a residence for the girl students. Mrs Gillespie and Mrs J Conrad were elected to represent the Auxiliary.

Mrs Veal and Mrs Dannecker were appointed the auditors.

Report of Nominating committee was then presented by Mrs K MacIntosh

On motion of Mrs Conrad seconded Mrs CH Doerr a motion was unanimously adopted whereby the Secretary was authorized to write a letter of regret over the illness of Dr Clausen & wishing him a speedy recovery. It was also decided to forward him flowers to day as well as a further floral tribute two weeks hence.

Meeting closed with the Lords prayer

after which the members retired to the basement for refreshment 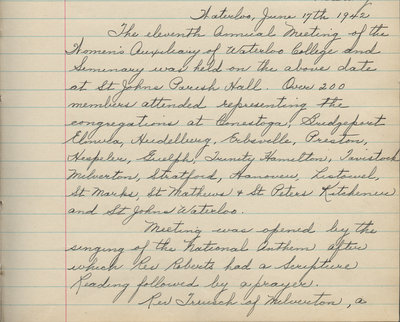