Creators
Women’s Auxiliary of the Evangelical Lutheran Seminary of Canada, Organizer of meeting
Zimmerman, Decima
, Secretary
Media Type
Text
Item Type
Documents
Description
Handwritten minutes of the ninth annual meeting of the Women’s Auxiliary of Waterloo College and Seminary, held in Waterloo, Ontario on June 19, 1940. Rev. Mehlenbacher was a guest speaker. Includes names of elected officers.
Notes
Minutes bound in a 23.5 cm x 19 cm dark green, hard cover notebook inscribed "Records". The words "Written minutes of annual meetings from May 1932 to October 16, 1943" are handwritten in ink on a piece of white paper taped to the cover.

Meeting opened with the singing of the National Anthem followed by a prayer by Rev Lloyd Schaus.

The President then called on Rev A. Mehlenbacher of Hamilton, a graduate of Waterloo College & Seminary who addressed the meeting. In his remarks he referred to his days spent at Waterloo College and Seminary and spoke most highly of the work of the Womens Seminary Auxiliary who at all times endeavored to do everything

possible for the comfort of the boys. He said that Life is no bed of roses particularly not so in these trying times. We must have courage and strength to carry on the work of the Lord but this courage & strength the Lord alone can give to us but we must ask it of Him in Prayer.

In his remarks he spoke of one thing which he hopes and prays for and that is “a United Lutheran Church of Canada”. He also referred to the message of Dr Willison to the meeting of Synod in which he said that we Lutherans have nothing to hide, nothing to be ashamed of. We are opposed to that extreme attitude that is often taken by certain radical minds.

The Dominion of Canada within the next ten years or so is bound to extend – particularly to increase in population. It is therefore up to us to see that all Lutherans who come into

our Dominion be gathered into the fold. In order to inculcate into the minds of these new citizens real loyalty to our Dominion it would be well to have our ministers who have charge over them, educated in the schools of Canada and not elsewhere. Boys born and educated in Canada sense the full meaning of the situation. We must therefore all strive to bring about the educating of our youth in Canada

Mrs Huenergard of Unionville spoke to the meeting for a few minutes. She said she felt that Waterloo College & Seminary was a monument to our Lutheran Church. She referred to a Women’s Missionary Executive Meeting that she attended in New York telling us as to how the ladies all joined hands and formed one big chain. No one there wanted to be a weak link in the chain and she asked that all women assembled be one chain & not one of them become

a weak link in carrying on the work of the Lord.

Minutes were read and adopted

It was moved by Mrs Veale seconded by Mrs JM Laing that we give $800.00 to the Board of Governors. Cd.

In Rev Mehlenbacher’s address he referred to the “Visiting Days” which were held at Waterloo College and he decried the fact that these were no more. The President in her remarks spoke of this and after some discussion it was moved by Mrs Bornhold seconded by Mrs Riehl that we again have “Visiting Days at the college. Two days were decided upon. – one in the fall & one in the spring – these to be looked after by the various churches. The one, the first Saturday in October is to be in charge of St Mathews & St Marks, Kitchener, Stratford, New

Hamburg and Sebastopol. The one in the spring is to be looked after by St Peters Kitchener, St Peters Preston and St Johns Waterloo.

The President gave a short resume of the work of the organization, She stated that she had been active in the organization ever since its inception and felt that she would now like to retire from office and suggested some likely ladies for the position.

Election of officers then followed, Rev Wittig taking charge of the meeting. Elections resulted as follows.

Mrs A Meyer, Mrs McIntosh and Mrs Sturm were appointed to this committee.

The Ladies from Sherwood presented the Seminary with a beautiful quilt which has been placed in the Seminary.

Mrs A. Goos of Alberta spoke to the Ladies at the lunch hour. She expressed the thanks of the people out West to the various churches who had sent money and clothing to their laboring congregations and told them why the building of a church was so long delayed.

Meeting closed with the Lords Prayer – Then followed a social hour 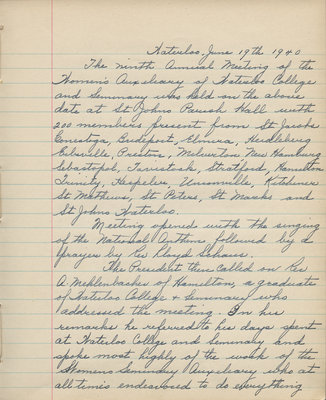