The meeting was opened by prayer by Rev A.G. Jacobi. Rev Jacobi also

addressed the meeting on behalf of the Board of Governors. In his remarks he told us that the finances for the past year were not as good as the previous year and this, no doubt, was accounted for the by the Anniversary Appeal of the Synod for Church Extension. A deficit of $5000 was experienced and on this account the college was in rather dire straits. He asked that each congregation endeavor to make up their Seminary Apportionment. If this were done all the money worries would be over with.

The speaker also decried the fact that there are so few Lutheran students enroled at the college. There should be very many more taking up Higher education for the good of our church and he begged the women assembled to go to their homes and do their best to encourage their sons and daughters to attend Waterloo College. By so doing, that is by increasing the

enrolment more money would also come into the Treasury. Rev Jacobi on behalf of the Board of Governors thanked the Auxiliary for the financial assistance given them and asked that we continue in the good work.

The Secretary read the constitution after which the President addressed the meeting. In her remarks she asked that more churches organize an Independent Auxiliary – not work thru the Ladies Aid etc. However if it is impossible to have a separate organization we feel very grateful for the donations from the Ladies Aid or other Societies.

Minutes of last meeting were read and adopted.

The question of scholarship was

next discussed. Since there was no Lutheran girl to qualify for our Scholarship it was handed to a worthy Lutheran boy Mr Wallace Mink of Elmwood.

The election of officers resulted as follows

The various local Auxiliaries reported how they raised their money.

Mrs Collins of Westmount was present & she spoke to the ladies and promised that she would go home and try to stir up a little more enthusiasm in her home church for our work.

The meeting adjourned with the Lords prayer, after which a social hour was spent. 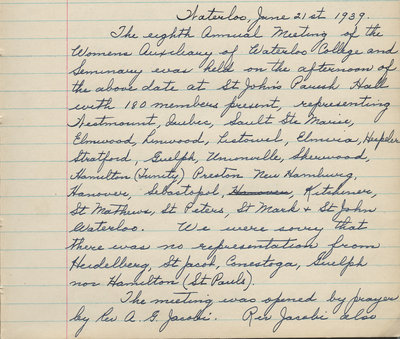