The sixth Annual Meeting of the Women’s Auxiliary of Waterloo College and Seminary was held in the college gymnasium on the afternoon of the above date with about 235 members present, representing Morrisburg, Hanover, Stratford, Sebastopol New Hamburg, Heidelberg, Elmira, Hamilton Preston, Guelph, Hespeler, Kitchener and Waterloo.

Meeting was called to order at 3 pm by the President.

in a church college like ours where we know that all the teachers and professors really believe in Jesus Christ that there is not the danger of the students being misled as is often the case in the larger Universities where religion is not taught on account of the differences in opinion of the many people who support these Universities.

The speaker appealed to the women of the Lutheran Church to be up and doing. Not to be satisfied to have their children to be just mere hewers of wood and stone but to look up to higher education. This apparently has been very sadly neglected as statistics showed.

We were advised not to grow weary in well doing and asked to continue our good work.

Rev Geelhaar spoke on behalf of the Board of Governors, bringing greetings and good wishes. He also spoke of the work of the Seminary

and College but particularly emphasized the financial side. He gave us some most interesting figures.

The speaker referred to the Seminary Endowment Fund which was recently started thru a gift from the John Telger Estate and asked that the members when making their last Will and Testament remember the college too.

An appeal was also made for the youth of our church not only to become preachers but also leaders in all walks of life.

He left with us 3 things to do.

1. Pray for the members of the Board, the faculty and students

2. Exert influence in interesting students to attend the school of their church of which they are a part

3. Continuance of our support.

Next followed the reading of the Constitution

The minutes of the last Annual Meeting were read and adopted

Then followed the disbursing of the funds on hand.

The scholarship money was again to be handed the bursar.

Moved by Mrs Reble seconded by Mrs Germann that we hand over to the Board as much money of the funds on hand as we possibly can. Carried

Officers were then elected.

President – Mrs J. Conrad, her time not having expired & therefore no election was necessary.

It was moved and seconded that we give Mr Holtz a small gift for the extra work he has in connection with our meeting, the amount to be left to the Executive. Carried

The various representations gave short reports on the ways and means of gathering their annual contributions to the auxiliary.

The date for holding the Annual Meeting was again up for discussion and it was finally decided that we change the date to the second last Wednesday in June each year. Carried

The meeting closed with the Lords Prayer.

Tea was then served. 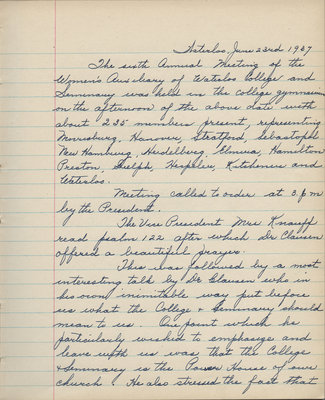