Creators
Women’s Auxiliary of the Evangelical Lutheran Seminary of Canada, Organizer of meeting
Zimmerman, Decima
, Secretary
Media Type
Text
Item Type
Documents
Description
Handwritten minutes of the fifth annual meeting of the Women’s Auxiliary of Waterloo College and Seminary, held in Waterloo, Ontario on June 24, 1936. Rev. Knauff was a guest speaker. Includes names of elected officers.
Notes
Minutes bound in a 23.5 cm x 19 cm dark green, hard cover notebook inscribed "Records". The words "Written minutes of annual meetings from May 1932 to October 16, 1943" are handwritten in ink on a piece of white paper taped to the cover.

Meeting was opened with prayer by Rev W Knauff.

Rev Knauff also addressed the meeting. He gave a very full survey of the present financial standing of the college and tried to impress upon the members present to try to realize what Waterloo College and Seminary really means to the Lutheran Church. He stated that over 52% of the clergy now serving our churches are were graduates of our Seminary.

In his talk regarding school finances

he stressed the desirability to remember the College by bequests when making our Last Will and Testament.

The Secretary read the minutes of the last Annual Meeting which same were adopted as read.

Thirty seven churches forwarded cash donations while Eganville sent a beautiful quilt which was raffled at the meeting and which netted the Auxiliary $15.00.

In connection with the sending of the quilt the Auxiliary felt that we should discourage the forwarding of articles for sale since the work of disposing of the tickets was quite an undertaking for the local Auxiliary.

Letter of thanks and appreciation from Miss Ruth Weichel the winner of the Auxiliary Scholarship was read.

Bill for Laundry was ordered to be

paid. A discussion arose out of this item; that is, the question was asked “Shall we continue to pay for the laundry which is quite an item each year”. After considerable talk it was moved and seconded that we discontinue paying the laundry of the college students but that we continue looking after the Seminarians ” Carried

The treasurer was authorized to pay over to the Seminary Board the sum of Seven Hundred Dollars. Carried

It was moved and seconded that we continue our Scholarship. Cd.

The President thanked all the various auxiliaries for their kind co-operation but asked that each society endeavor to have its annual contribution in the hands of the Treasurer a little earlier in order that the Treasurer’s books might be closed and audited before the next Annual Meeting.

Rev Knauff offered up a beautiful prayer of praise and thanksgiving after which the meeting closed with the Lords Prayer. Bunch followed 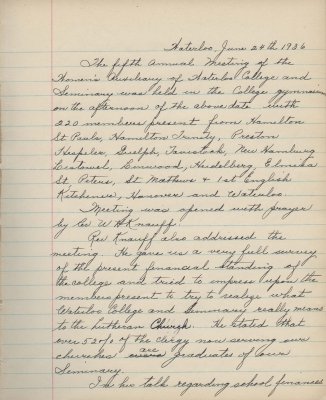