Mabel’s letter of Aug. 30, written to the two of us, i.e., Bonnie and me, was very interesting and full of news and was highly enjoyed by both its recipients, to say nothing of the rest of the family. If I knew that she would still be at home when this letter arrives, I might accidentally or otherwise drop her a line or two; but as she will most probably be away at her work, this would probably be a waste of effort, which I will therefore spare myself. The outing which she had in the Old Dominion in the big hotel by the sea and the splashing in the waters of the deep and the soul stirring, musical concerts which she participated in must have been exceedingly enjoyable. But all that is now a thing of the past, sweet memories, as it were, which will be the case with my own vacation in a little over a week’s time. School sessions, like time and tide, wait on no man, or woman either for that matter. In fact the classes are already gathering. On Thursday night last Dean Froats and wife arrived after having spent the whole summer on their truck farm at

Port Dalhousie on one of the Great Lakes in Ontario. The same night Prof. Sandrock and his Frau arrived, being driven home in a car by their son from Nebraska. They too had been away all summer with their sons in Wisconsin, Iowa and Nebraska. Prof. Sandrock, who is about 70 greatly improved his appearance by having an exceedingly big wart cut off the side of his nose. As a result he looks about 10 yrs. younger and 100% handsomer. This morning I went down to St. John’s to the English service to hear Prof. R.J. Wolfe (Wolfe) of Philadelphia preach. I was disappointed in a way, as he didn’t preach or even take a text, but delivered a lecture about young people and their present day problems. The address was fervently delivered, but necessarily on account of the limited time at his disposal dealt mostly with generalities and I doubt whether the congregation was very much enlightened on the subject. However, it wasn’t difficult to stay awake while he was speaking. Monday is Labour Day – a universal holiday except for the Brewery Warehouses. However, Herman got Arthur to substitute for him, took a day off, and left this morning for Toronto to attend the Exhibition there. Arthur was down for a couple days last week and reported having had a good time. I doubt if any of the rest of us will get down, and as for myself there are no regrets, as I have no desire to see it. If you have seen it once or twice you know what it is like, and a repetition of the visit becomes insipid.

We are having fine weather just now – not too hot and not too cold, but just right, and everything looks bright and green from the fine little showers we have had. It is threatening rain this afternoon and in fact has put down a few drops here and there; but I hope it will hold up till we get in a few horseshoe games. Carolus has just come in and is reporting to his mother about his trip to Toronto yesterday afternoon, from which he got back late last night. I get in only a word here and there as I smoke my cigar and write this letter; but from what I can catch of his conversation I infer that he had a good time. Visitors, who are always welcome, continue to pour in on us. Last week we had Rev. Stockmann of Tavistock with us one day and Rev. Fischer and his wife of Walkerton one evening till after midnight; then we had Rev. Schmidt of Buffalo with us for a couple days, off and on. He supplied plenty of ale and beer and we had a grand time. I think we entertained about 25 ministers from time to time throughout the summer, the majority of them being former graduates of our Seminary. So even though we were at home all summer, we couldn’t get lonesome. The children are again in school

and seem to be quite enthusiastic over it. Florence is particularly gratified because she has a “man teacher” this year. She and another little fellow and Frederick and Joyce Roe had a little picnic of their own in the park yesterday. The tiny couples made quite a picture as they walked down the street side by side – a couple in front and a couple behind. When they start out so early, one realizes the progress the present generation has made over us old fogies of former times. Our Mountain Ash tree, which stood near my study window, I had sawed down last week. It had practically died from the frost and the drought and in place of being a thing of beauty and a joy forever, it had become an eyesore. So I had it removed, and now we have a better view of the street. I had also a big dead limb cut out of our huge Manitoba Maple tree; but this tree was so big that you hardly notice the loss. These are all the physical improvements we have made and this also exhausts the news, so I will close more or less abruptly. With lots of love and all good wishes, I am

[signed] Most Sincerely yours, 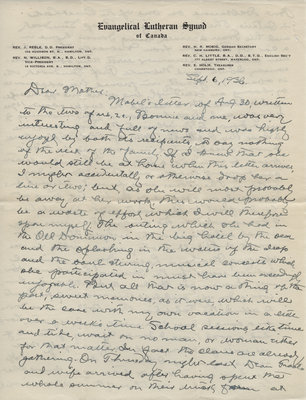