The meeting was called to order by the President Mrs Clara Conrad, Prayer by Rev Roberts

Rev Roberts gave a resumé of the work of the college, stressing the financial need. He told of various bequests which had been made and asked us all to think of our college and Seminary when making our last Will and Testament. He expressed the appreciation of the Board of the work of the Auxiliary.

The Secretary read the minutes of the last Annual Meeting which were adopted on motion of Mrs Weidenhammer & seconded by Miss Kraft. Carried

Out of the minutes rose a discussion regarding the Scholarship which has been given by the Auxiliary. After a somewhat

lengthy discussion, after which I believe everyone present seemed to have a better understanding of our Scholarship it was moved by Mrs Willison seconded by Mrs G Schmidt that we continue giving the Scholarship of $150 to the Lutheran girl who qualifies for same. The President stressed the point that each Auxiliary place before the young girls of their church the fact that such a Scholarship is available and to impress upon them the need of their applying for it. Carried

The Treasurer reported receipts of $991.27 and after payment of various accounts left a balance on hand of $892. – a considerably better showing than in 1934.

The books had not been audited & owing to the illness of one of the Auditors, Miss Hoefling, the President appointed Miss Allemang who with Mrs Weppler audited the books immediately following this meeting.

paper” since the Board is in no financial position to redeem same. After some explanation it was moved by Miss Kraft and seconded by Mrs Stauffer that we return to the Seminary Board the Bonds for cancellation. Carried

Representatives from various auxiliaries stated how they made up the money which they forwarded, the majority raising same by free will offerings or membership fees. Heidelberg reported that they had recently formed a Ladies Aid and that they hoped to be able to forward something this year. Sebastopol gave a subscription for the first time and promised to do better hereafter. One term of interest is the fact that Nova Scotia, which has but eight parishes, sent in a donation from each one. “Take notice Ontario”

Out of 53 letters sent 40 churches responded.

Laundry Bill was ordered paid. At this point the desirability of continuing the laundering of the blankets etc came up for discussion when it was finally moved that we continue with this work. Carried

The election of officers followed, Mrs Conrad vacating the chair and the Vice President Mrs Knauff being appointed chairman. The following slate of officers were elected

Various letters were read by the Secretary, one from Dr Clausen expressing his regret over his inability to be present at the meeting but expressing the appreciation of himself and the Board of our work

Margaret Conrad sent in a letter of appreciation for the Scholarship which she was fortunate enough to win .

The meeting closed with the Lords Prayer after which brunch was served. 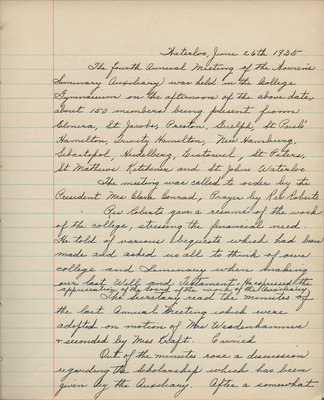