Creators
Women’s Auxiliary of the Evangelical Lutheran Seminary of Canada, Organizer of meeting
Zimmerman, Decima
, Secretary
Media Type
Text
Item Type
Documents
Description
Handwritten minutes of the third annual meeting of the Women’s Auxiliary of Waterloo College and Seminary, held in Waterloo, Ontario on June 27, 1934. Rev. Schmieder and Rev. Roberts were the guest speakers. Includes names of elected officers.
Notes
Minutes bound in a 23.5 cm x 19 cm dark green, hard cover notebook inscribed "Records". The words "Written minutes of annual meetings from May 1932 to October 16, 1943" are handwritten in ink on a piece of white paper taped to the cover.

The Third Annual Meeting of the Women’s Auxiliary of Waterloo College and Seminary was held in the College Gymnasium on the afternoon of the above date with 125 ladies present representing 1st English St Matthews, St Peters Kitchener, Guelph, Preston Elmira, St Jacobs, New Hamburg, Hanover, Trinity, Hamilton and Waterloo.

Meeting was called to order at 3. P.M by the President, Mrs Clara Conrad after which Rev Roberts offered a prayer and gave a resumé of the work of the college stressing the financial end.

The President, owing to the late arrival of the Secretary spoke of some of the work done by the Auxiliary.

The Constitution was then read and discussed item for item. The article dealing with the time for the Annual

Meeting was discussed pro and con. It was finally decided on motion of Mrs Mosig seconded by Mrs Fink that the Annual Meeting be held the last Wednesday of June each year rather than the first week in July. It was also stated that we ask all the organizations to please keep this date open from year to year. Carried

In connection with the Treasurer’s report the matter of Scholarship was discussed. The President pointed out that $150 was voted last year of which but $75 was used so that the other $75.00 was still in the Treasury to be used at the call of the Dean or other person in charge of the Scholarships.

The meeting moved that $500 be paid to the Board of Governors on motion of Mrs Veal seconded by Mrs Fink.

Moved by Mrs Stertz seconded by Mrs Weidenhammer that the Auxiliary

make the needed repairs to the girls furniture etc, such expense not to exceed $150. and this money to be taken out of the money on hand for the “Girls Residence & Furnishings Account”. Carried

Then followed the election of officers for the ensuing year.

Mrs Conrad whose term of office does not expire until 1935 acted as chairman.

the meeting adjourned after repeating the Lord’s Prayer.

During the social hour Rev Schmieder was called upon to say a few words. He spoke most highly of the untiring work of Mrs Hagen who owing to ill health was forced to resign from her office as Treasurer which office she held for more than twenty years. This was followed by a presentation to Mrs Hagen of a bible beautifully inscribed, Mrs Conrad making the presentation. Mrs Hagen very fittingly responded and promised not to let her interest in the work lag. and stated further that since St Matthews had really no organization she felt as if she were an outsider. He however assured her that such was not the case 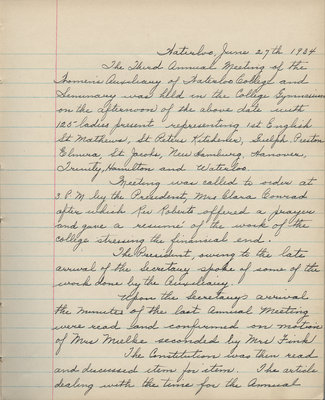