The meeting was called to order by the President, Mrs Clara Conrad

interesting report on the work of the College and Seminary. In fact never before was the work so fully explained to the women. A vote of thanks was tendered to Rev. Schmieder.

The constitution was read after which the minutes of the First Annual Meeting were read and adopted on motion of Mrs Hagey and seconded by the Mrs Weidenhammer.

Treasurer’s Report showed a total income for the year of $882, 56 as opposed to $922.22 for last year. The report showed donations from 32 churches as opposed to 24 in 1932, Pleasantville N.S. Wellesley, Williamsburg Riverside, Welland and Brantford not sending any donation while Bridgewater N.S., Conqueral Mills N.S. Mahone Bay N.S. Halifax N.S. Elmwood Zurich, Heidelberg, Desborough, Linwood Guelph and Conestoga were added to the list. Expenditures totalled $1001.40

The report was adopted as read.

Reports from various delegates were then received and each one reported an interest in the work even tho the majority of churches reported a slight falling off in donations. Strange to add the smaller churches showed more gain than the larger ones.

Then followed the election of officers for the ensuing year.

Mrs Hagey took the chair and asked for nominations.

Faculty had approached her regarding the advisability of giving a Scholarship to the value of $150.

After considerable discussion it was moved by Mrs Weidenhammer and seconded by Mrs Germann that our Auxiliary provide for this year a Scholarship of $150 – Lutherans only to be eligible, it being the consensus of opinion that this should be the case because the funds of our Auxiliaries come from Lutheran Congregations. Other matters dealing with the Scholarship was to be left in the hands of the Executive Committee together with the Faculty. Carried

Moved by Mrs Wonnenberg seconded by Mrs Mosig that the Laundry Bill and other bills on hand be paid. Carried

efforts during her term of office for the past twenty years, Mrs Hagen on account of ill health being forced to give up her office as Treasurer. We certainly all were sorry to have Mrs Hagen resign but she nevertheless promised not give up her interest in the work. 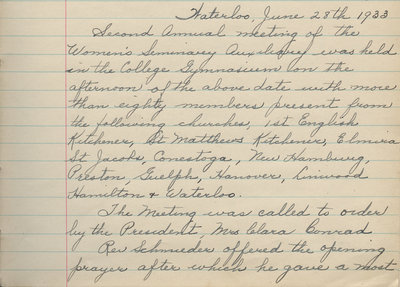