First general meeting of the newly formed Seminary Auxiliary was held at St Johns Church, Waterloo on the afternoon of the above date.

Mrs Conrad opened the meeting with prayer after which she called upon Dr Clausen, President of Waterloo College to address the meeting.

Dr Clausen gave a most inspiring address in which he spoke of the work of the college and asked each and all of us to lend our whole hearted support to the institution on the hill.

The President of the Auxiliary extended to Dr Clausen our hearty thanks for being with us and giving us such a fine address.

We next turned to the business of the meeting.

The Constitution was read and discussed.

Secretary’s & Treasurer’s report were then read and adopted.

Reports from representatives of various auxiliaries and churches were then received and every report was most gratifying.

It was moved by Mrs Stertz seconded by Mrs Miller that we give Five Hundred Dollars to the Seminary & College Board. Carried.

Moved by Mrs Sohrt, seconded by Mrs Miller that the bedding and linen at the college be laundered and that the Treasurer be authorized to pay same. Carried.

Next followed a lengthy

discussion regarding the advisability of our giving a donation toward a Girls’ Residence. After hearing discussion pro and con the following resolution was passed all but unanimously.

I would make the notion that the Executive of Woman’s Aux. be authorized to make a donation toward a girl’s residence when the Board of Governors deem it advisable to undertake such a residence.

I’ll second that notion made by Mrs. Roberts

The question of where and when to hold the future meetings was next discussed.

It was finally moved by Mrs Stertz seconded by Miss Veit that the meetings be held on the College Campus each year in July notice of such meeting to be forwarded each Society by the General Secretary. Each delegate or delegation to supply her or their own lunch. Carried.

The following officers were elected for the ensuing year, the President’s term not expiring until 1933.

Hanover Conference to be appointed

The meeting adjourned at 5 p.m. the delegates being entertained at tea, the guests of the Waterloo ladies 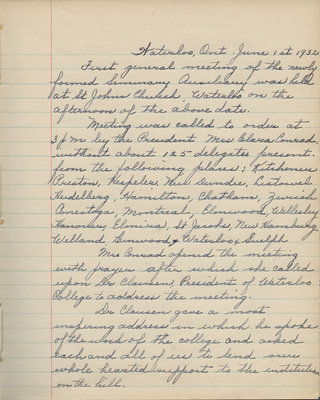