I will try to write you a few lines before starting off on my trip of pastoral visitation in the lower congregation from which I will not be back till late to-night as I am to take in the Luther League meeting at Mr. Herman Hayunga this evening. We have had some very cold weather since I wrote you last week and some exceedingly white and heavy frosts. On the 23rd a few flakes of snow fell. Yesterday and to-day have been somewhat milder and very fine for autumn weather. I started our furnace Monday and the house is so warm that one can sit around in his shirt sleeves and enjoy comfort. Yesterday I walked down to St. John’s Church and back, and while there superintended the cleaning up and leveling of the cemetery and taught my catechetical class in the afternoon. In consequence of the walk I am feeling very tired to-day, which goes to show either that I am not as young as I used to be or that my muscles have become disused to walking. The distance is six miles return trip – which ought not to be much of a walk for a man. Bonnie has been cleaning house all week and has it all done but the coal shed. To-day she has been washing with what help Minnie and I gave her. You see we have a washing machine now and do our own wash. It comes considerably cheaper and doesn’t take a great deal of time.

Capt. Enoch Mason, Mrs. I.B.’s father, died suddenly at Mahone Bay about two weeks ago. I imagine Mrs. Mason and family will break up house keeping and move up to New Germany. Mrs. DeLong wrote Minnie the other day that Don and Muriel are engaged and that they were all very proud of it. Thus Don will become brother-in-law to his father and Muriel’s sister will be her mother-in-law. It’s quite a mix-up and would be puzzling to cipher out what relation the children would be, but it is hardly likely that there will be any occasion for reckoning that up. Some people seem to think that the chief duty of married people is to keep from having children. The Masons did everything in their power to bring about the match. Father DeLong and wife even went to St. John for a week leaving Muriel and Don to keep house and take care of Lynton. It was shortly after that that the engagement was announced.

A serious shooting accident occurred a few miles below here Monday morning. Dr. Clifford Casselman, Dentist and brother of the late P.C. Casselman was accidently shot in the hunting camp by one of his companions who was cleaning out his gun which he thought was unloaded. The Doctor had his arm broken and a wound in his hip. He is getting along fairly well, however, and will recover unless blood poison should set in. He is a fine young man and member of our Church. This family has had a lot of trouble within the last year. First Mrs. Dr. Casselman died, then his house burned down, his mother went through an operation for cancerous tumor of the bowels, and

finally he himself died. Now comes this new trouble. Everybody feels very sorry for the family. Dr. Casselman provided in his will that his children should be brought up Lutheran. He also left a sum of money for the Bible Society and gave evidence in the wording of his will of his Christian faith. Carolus is learning fast and can write quite a few sentences now. He said the inspector was around the other day and wanted to see their scribblers. He said “I showed him my best pages and that he said “that was good.” Marion is one of the greatest talkers for her age you ever saw. Sometimes she makes rather violent suppositions. She came in the study the other day and said, “Father, if the teacher should evacuate the school, wouldn’t that be awfully scandalous?” I told her it certainly would, but that I didn’t think the teacher would do anything quite so scandalous as that. Carolus was bragging to Herman the other day about being born first. He said “I was born before you and before Marion and Arthur: I am the head-leader of you all.” All the children still speak of the spare bedroom as Uncle Herbert’s room. Bonnie has got entirely over her tooth-ache and neuralgia. She and Marion and perhaps Herman are going with me to the country directly. Well, I guess I will stop here and so for the rig. With love to you all and all good wishes, I am 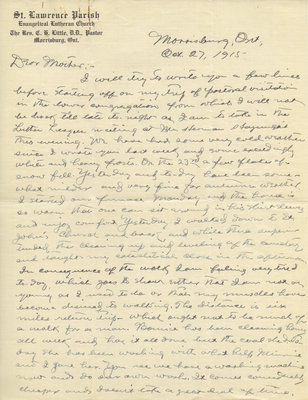