I don’t know what sort of weather you are experiencing just now, but we are having a taste of real winter. It has been cold ever since Sunday. Monday we had a lively little snow storm, and while it did not last very long and only gave us 3 or 4 inches of snow yet the condition of the ground was such that it made very good sleigh roads and I have been driving the sleigh for the last two days on all trips. Last night the thermometer touched the zero mark and I think it will do a little better to-night. It has been down around zero every night since Sunday. I took Carolus with me to Mahone Bay Sunday. We had a cold drive coming back home that night but he didn’t mind it and wants to go with me again Sunday. But as I go to Feltzen South, which is 20 miles away I don’t think I will take him. He is out playing with his sled nearly all day and enjoys the snow and the cold. Herman tries it every once in a while but is soon in the house again generally crying on account of the cold. “Minnie” was with us till to-day. She left this evening for

New Germany. She said she didn’t think she would get back this winter, but I think she will for all. Bonnie was up home for the day last Friday. She didn’t find the boys at all well. Harold is going down grade pretty fast. He has frequent bad spells and stoppage of the bowels and has to take morphine almost constantly. I am afraid the poor fellow can not last very long. Lynton’s sore from the operation has not healed up and another spot is developing on his leg. The doctor says he is tubercular also.

We had our Pastoral Association Monday and had a very pleasant time and an elaborate dinner at Pastor Buchholtz’s. All the pastors were present but Pastor Nonamaker who had a funeral that day. As Minnie was here, Bonnie was able to be present also without taking the baby. The pastors appointed to have papers did not perform their duty – one being absent and the other unprepared. But we discussed a number of practical matters, so that our meeting was not altogether in vain or devoid of profit. And anyway we had an enjoyable day of it. I received a letter yesterday from a pastor at Watertown, N.Y., who inquired about vacancies in our Synod and said he desired to make a change. But just at present things

are tied up in our vacant parishes. Mahone Bay has resolved to call a student from the Senior class at Mt. Airy recommended by Dr. Jacobs, and I have communicated the resolution to him. He will not be open to a call before Feb’y 24, and I don’t know whether he will accept it then or not. But anyway we can do nothing until he decides. The Rose Bay people held a meeting last week with the purpose and intention of extending a call to Pastor Fettely, but I have not heard whether they did so or not. So I couldn’t give Pastor Brandt any very definite information. But I asked him to await developments for a short time.

I am quite busy just now with my sermon work, Orphans’ Home work and editorial work on the Nova Scotia Lutheran. I haven’t done much on this latter yet for January and the month is fast fleeting. Our Board meeting too is coming on rapidly and I will have to get out a report for that. I haven’t even had time to go rabbit shooting for the past week.

Herman was playing the other night with my hand satchel and he said “I am so happy”. After awhile he got it shut and wanted me to open it. I was busy and told him I couldn’t just them. And he said, “Now I’m not so happy.” Of course, I opened it for him.

Marion had been sucking nights yet till this week and as it was weakening to Bonnie and not doing Marion any good she decided to wean her. She cried good and hard for about half an hour and I took her in my arms and pacified her and she slept all right. The next morning I said, Marion you will never want to suck “titty” any more, will you? She shook her head and said “No”, and ever after that she replied the same way and what is more stuck to it. But she wants to sleep in my arms all the time and won’t sleep against her mother. She is a great father baby – quite as much so as the boys. Don’t mind the mark you see at this place on the page. It is the clinography of one or more of your grand children. But I must close, as it is getting late. With love to all, I am

Say to Arthur Moser that the Teco vase came to hand in due time and in perfect condition, and filled the bill completely. I sent him the money for it the other day but did not have time to write anything as I fixed it up while down town. 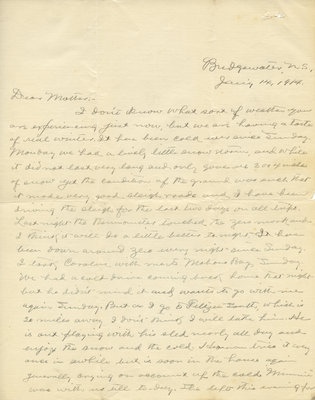