As the periodic time has rolled around again I will try to write you a few lines this evening. I have had so much to do and have been so very busy for the past few weeks that I hardly know which way to turn. I thought I would get out of preaching last Sunday but I had to preach for all. I preached for Pastor Buchholtz here at Bridgewater and at St. Luke’s. I took Carolus had Herman with me down to the latter Church. They behaved very nicely, although Herman walked around the pew a time or two. Monday I went back in the country in search of a girl. I succeeded in finding one and yesterday I went back after her. That gave me a drive in the two days of 52 miles. But I think the girl is going to prove a good one. She is about the dozenth girl we have had since we have been here. I took Carolus with me when I went after her. Bonnie was busy and didn’t have time to attend to him properly, so she said if he would undress himself she would put on his good suit for him and he could go. As his romper suit buttons behind he could not unbutton it. But nothing daunted he hunted Herman up and got him to unbutton it

for him and so got to go. On the way he was driving and urging the horse along but couldn’t get him to go very well. So I said to him “The horse has no respect for you”. Quick as a flash he handed the reins over and said “Well, you take the lines then”. He is always ready with an answer. This afternoon Herman came in and said “I love father better than mother”. Bonnie got after him about it but he stuck to it and said “I love father the best.” Both the boys are quite father boys. Marion crawls everywhere. She is the only one of our children that ever really crawled. Bonnie intends going up Home on Monday. She will take Herman with her to show him off. She thinks he is the prettiest boy that ever was, and is busy now making him a nice white suit. To-day I have been arranging things for our Tea and Coffee stand at the Wentzel’s Lake Reunion, Sept. 4 and also cutting clippings in the Nova Scotia Lutheran. The August number just came out yesterday. Dr. T.B. Roth, I think, has arrived and is with Pastor Bermon at Mahone Bay. His wife is with him. Is Herminie with you still. We feel so sorry for her in the loss of her dear little Herman. I think I would be afraid to bring my children down into the South. It seems so much harder to bring up children down there than

in the cooler north. We have had a delightful summer – the pleasantest weather I think I ever experienced. It was quite dry for a time, but on Saturday night last we had a fine rain, which was a great blessing to the whole country and which also put out the many forest fires that had been raging. I expect to leave here on Sept. 6 for Toledo to attend the General Council Convention of which I am the 11th Vice President. Even at that I am not quite at the foot of the list, Pastor J. Mauer being the 12th. I hope to have a profitable as well as pleasant trip. Pastor D.K. Fettinly is expected back this evening with his bride. He married Miss Mary Saddlemire at Glen Becker, Ont. yesterday at high noon. We will all have to combine and get a present for him according to custom and precedent governing such cases. As Pastor Nonamaker will no doubt be married this fall, it is a hard year on our pastoral pocketbooks. Little Lynton is very sick. The doctors thought at first it was sciatic rheumatism but later were of the opinion that it was hip disease. He has been in bed for three weeks and they have a trained nurse with him. Harold is still at the Sanitorium at Kentville. We are harvesting some of our grain now. We made 20 bushels of barley and will probably have 100 of oats. The dry weather affected the grain considerably. But I must close for this time. With love, I am 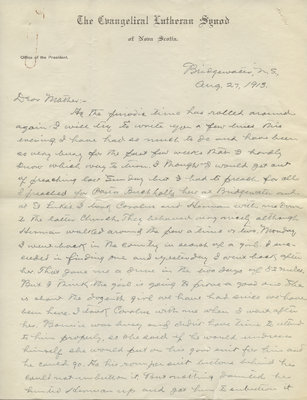