I did not write you last night as I was away for a couple days and only arrived home again this morning. Monday evening I went up to Hemford to do some canvassing for the Home. I went up on the train and walked around all day Tuesday and Yesterday. As the houses are somewhat scattering it required a great deal of walking and I am pretty well tired out today. I got in about $12 in small amounts from 25 to 50 cents and would have got three or four dollars more if I had stayed up today, but as Pastor Buchholtz wants me to preach for him Sunday I thought I had better come home and do some studying tomorrow and the next day and leave the rest of the Hemford territory for another time. The heavy rains put us back considerably with our sowing and planting, but if the weather continues fair we will nearly finish up this week. We have about 20 bushels of grain out and 10 bushels of potatoes planted so far. I want to plant from 10 to 15 bushels more of potatoes and from 5 to 10 more of oats. We had a heavy frost last Sunday morning and have had some slight ones since but the days are getting nice and warm now. We have had no hot weather at all yet. Yesterday and Tuesday were almost the only days that one could go

comfortably all day without a top coat. I don’t know whether I told you last week about Harold DeLong. He had been working in the bank in Sydney and became quite sick. The doctors pronounced it Tubercular peritonitis and we were quite uneasy about him. Father DeLong went up to Sydney to see him last Thursday and is there still, but the last word we received was that Harold was improving and will come home as soon as he is able. I suppose the doctors have put him through an operation as that is said to be the only cure. Dr. Rehfush says such an operation is not dangerous or serious. Harold probably contracted the trouble while in the bank here at Bridgewater as another bank boy and special chum of his in the same bank was sent away recently to a Sanitorium for Tuberculosis of the Lungs. Harold who is only 17 was making a salary of $500 a year before he took sick. He will have to give up the business now for a year at least. I saw Mrs. Silver for a few moments on my way over to Hemford. She is now quite happy leading a life of ease all alone. She is right in her element at present as they are going to have a “Tea Meeting” on the 11th to raise money to pay off the debt on their Church. I never allowed them to have one and they are enjoying their liberty now. However I hope that the end will be attained even though the means cannot be justified. Our Synod meeting is drawing very near and I must soon get to work on my sermon and

report. I haven’t heard yet whether Rev. Bornhold is coming to Rose Bay or not, but I hope he will, as in case of a vacancy I will have to fill the pulpit till they get some one. I don’t mind that so much but am afraid it would hamper me in my financial work. I received an application for the admission of three more children last week. As the mother who alone if living is in very poor circumstances, I suppose we will have to take them.

Carolus and Herman are enjoying themselves these fine days out of doors. The boys take turns about in going with us to Church. Carolus likes to go but he always knows when it is Herman’s turn and never thinks of claiming it. He is very good that way. If he and Herman have pieces of buttered bread and Carolus has the biggest piece one day the next day he will give Herman the big piece. But I must close. With love to all, I am 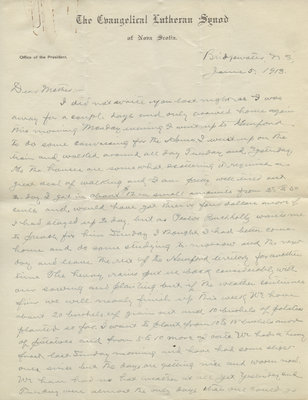