It hardly seems a week since I wrote you last, but time flies; and not only have seven days slipped by, but one administration has gone and another has come. I hope you will now have better government in the United States. I am sure there is lots of room for improvement. It ought to be especially gratifying to Southerners to have not only a Democrat in the Presidential chair but one who is at the same time Southern born. I anticipate that President Wilson will give the country one of the best administrations it has ever had. I notice one of my old friends is in the Cabinet – Josephus Daniels of the Raleigh News and Observer. I knew him quite well when I was in the newspaper work and attended the Press Association Conventions years ago.

We are anticipating that the Liberals will force an election here in Canada on the Borden naval policy of contribution to the Imperial Navy. It looks now as if the Government will have to go to the country on the question, and if it does I think its doom is sealed and the Conservative regime will be short lived. Any way we should have a Liberal administration here to correspond with your Democratic administration in the States.

I imagine Bikleˊ had a great time and took everything in at the inauguration. From what our Canadian papers say, it must have been an unusually brilliant affair. But enough on politics. I will proceed to the more interesting subject of the weather. We had a big snow storm to-day; it snowed “from early morn to dewy eve”, as it were, and may be still at it tonight for all I know to the contrary. The snow had become quite thin for sleighing before this, but to-day’s storm will repair the breaches. We have now perhaps 10 or 12 inches of snow. As our winter set in so late it will be nice if it holds out the best part of this month.

I had intended to go down to Rose Bay and Middle La Have on a canvassing tour this week and should have done so by all means. But I had my horse shod a week ago and the blacksmith drove a nail in the quick and he has been so lame that I couldn’t drive him further than down town and back and he is still bad. I am sorry as it puts me back considerably. I collected about $20 last week in Lunenburg. This makes about $135 that I got out of Lunenburg this winter, about $10 more than last year. We are selling about $7.50 worth of Butter, milk and Cream a week now from our cows. This helps us along considerably with our running expenses. But we need a great deal more beside this, and I am

anxious to be out and getting it. I suppose we will soon have our called meeting to consider the proposal of the German Canada Synod. I don’t thinks however that it will go through. With a good girl things go along a great deal better here than they did. I only hope our next will prove as good as the one we now have. The one who is to succeed her is a woman, a widow of about 50 years of age and ought to be O.K.

I am getting quite fat, whether from the abundance of good cream, milk and butter or from the effect of age I don’t decide; but I weigh at present 163. I guess I knock all my brothers out of the ring in the classification of heavy weights.

Little Marion becomes more and more interesting every day. She laughs out loud now a great deal and is the best natured and the prettiest little child you ever saw. Herman is a great talker. He talks plainer I think that Carolus does. But Carolus is a real little man. He is so old fashioned in his way and sayings. The other day he came around to me and said, “Father, wouldn’t you like to do something for me?” I said, “Yes, sure. What is it?” He said, “I would like for you to hear me say my lesson.” He reads and spells quite well as far as he has gone, and takes great interest in it.

I got a box to-day that was shipped from Lewisford

Pa. on the 23rd of Sept. 1912. It was a box of 2nd hand clothing and was billed at 90 lbs. It was sent freight and prepaid to the extent of $3.85. But I had to pay $4.80 more before I could get it out of the station. When I brought it home and opened it up I was sorry that I took it out at all. It contained mostly women’s dresses and coats for which we have no use at all and there was hardly a dollars worth of stuff that the children could use. I have written to the General Freight Agent to see if I can’t get a refund of the amount that was advanced as no credit was given for it on the bill of lading. It is bad to waste money like that when we need it so badly. Some people’s idea of charity is to give what you don’t want and can’t possibly make use of. It wouldn’t be so bad if it involved no expense to the recipients, though it would do them no good. But when it costs them so heavily, it is abominable. But I must close. With love to you all from us all, 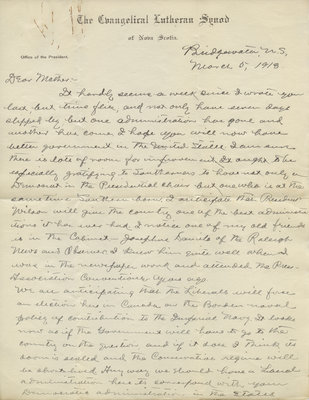