I think I forgot last week to say that Carolus received your letter in answer to his hieroglyphic epistle and that your surmises as to it contents were in general correct. He says though that he also wrote you to bring him some candy, bananas and figs which part you evidently failed to decipher. We received a post card from Mabel recently written from London and inquiring why she did not hear a word from us all summer. As she is probably at home again by this time I will say by way of answer that we did not know how long she was remaining at her Parisian address and did not therefore know whether a letter from us would reach her or not. And so we did not take the risk. I suppose she is full of her trip and has a great deal to say about it. She might write us about some of her experiences.

Our Reunion was quite a success this year. Dr. Long gave us the finest address that has ever been made there I think. The collection taken up amounted to $34.50. We cleared nearly $50 from our stand and would have made more, but our provisions gave out. I had to be out collecting

money to keep the place going and did not have time to collect sufficient stuff for the Lunch stand. Besides the $83 brought in in this very way I have received $100 as part payment of our part of the other proceeds. $50 is to come yet and we will come in for a percentage on the Railway tickets when settlement is made by the company. We had an ideal day and the crowd was a large as usual. Everything passed off nice and quietly too. It was a decided improvement in this respect over last year. Dr. Long gave an address at Lunenburg and at Rose Bay and also preached at these places while he was up. I don’t know, but I suppose he has gone back at this time.

I was up at New Germany yesterday to see Miss Phoebe Arnburg who has been in bed sick since the middle of June and who had expressed a desire to see me. I think she has cancer of the liver and don’t imagine she will ever be any better, though she may linger quite a while yet. I feel very sorry for her, as she was always kind to me and is a good little soul. She has to take morphine most of the time. But in spite of her suffering she appears quite cheerful

and resigned to whatever may come. Bonnie received a letter from “Minnie” tonight. She writes quite glowingly of her new home and is in rapture over Portland, Ore. I weighed the other day and weighed 160 lbs. with my light summer clothes on. I took Carolus with me to New Germany yesterday and everybody was carried away with him. He made a lot of fun with the questions he would ask in the train. I tell him he is a regular interrogation point. The other day I had him and Bonnie down street. Bonnie got out to do some shopping and then walked up a little farther while Carolus and I stayed in the waggon and drove. Carolus saw her and said to me “Father, there goes Mamma; she walks up the street like a lady”. I was sitting in the study one evening holding Herman and the clock struck seven. He at once called out “Seven o’clock”. I told him to go out in the kitchen and tell his mother. He went out and called at the top of his voice “Mamma, seven o’clock”. Seven o’clock is his bed hour. A boy that can tell time at 18 mons. of age is quite bright, I think. We have had some pretty heavy frosts lately. Some of our pumpkin vines were killed. But I must close. With love to you all, I am 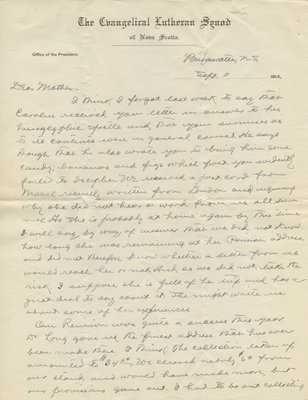