As I have a little leisure just now I will try to write you at least a short letter this evening. Owing to the fact that I will have to preach at Lunenburg Sunday I am busy sermonising again but haven’t made much head way at it so far. Rev. Weaver left Monday of this week for Phila and will be gone three or four weeks during which time I will have to supply for him and run his classes on Monday. Beginning with last Thursday night the missionary tour arranged for by the Executives of Synod has been going on according to schedule. The star of the troupe, however, the Rev. M. J. Bieber, was not present, he having been snow-bound somewhere up in Quebec. He had not arrived on Monday morning yet, but presume he is here by this time. Our first meeting was at Mahone Bay. The attendance was not very large, owing partly to the extreme cold, neither was the collection. But as a Woman’s Home and Foreign Missionary Society was organised that afternoon, the managers of the tour felt that something was accomplished worth while. The next meeting was held on the following night at Lunenburg. The church was not full but considering the weather, which was snowy and

cold, a very respectable congregation was out and the offerings amounted to something over $8.00. There a W.H.and F.M. Society was organised with more than 60 members. I attended both these meetings and came back each night. Thursday night it was half past 12 when I reached home and Friday night half past one. A meeting was to have been held Monday night at Rose Bay and another last night at Middle La Have. The one Monday night was not held on account of an unusually heavy storm, but I suppose last night’s meeting was pulled off. Tonight the meeting is to be held in the Church at Bridgewater, tomorrow night at Camperdown and Friday night at Upper Northfield. I expect to attend the first and last of these, but that will be the best I can do. Last Sunday I preached for Pastor Bermon in the Northfield Parish at North River, New Germany and West Northfield. The weather was extremely cold, but the sleigh roads were fairly good. I left here on Saturday afternoon arriving at New Germany about 7 p.m. and stopping at my father-in-laws, where all hands made me feel quite at home. Mrs. DeLong, Mrs. Silver and Miss Phoebe, and “Minnie” all inquired about you and Pearl and “Minnie” told me again how much she thought of you and how you didn’t seem strangers to her at all etc. Sunday morning was the coldest of the winter. The ther-

mometer registered 16° below zero at New Germany, but as it was not windy as on Saturday one didn’t mind the cold very much. I reached home about half past ten o’clock Sunday night. I took a cold from breathing through my mouth Saturday – my nostrils being stopped up by the cold wind I couldn’t avoid it – but am pretty well over it agin. I got my new suit Saturday and also a pair of overshoes at New Germany Saturday night. Bonnie thinks that I now make quite a presentable appearance. I received $75 on salary last week, but it is now about all gone and I will have to make requisition for the remaining $50 before long. Carolus fell down the cellar steps Saturday morning and raised quite a bump on his forehead, but beyond disfiguring himself temporarily he was not any the worse for the long tumble. He rolled down from the top to the bottom.

Pastor Bermon was to hold a congregational meeting at Mahone Bay Sunday night to take action toward calling a pastor. He told me that they were going to give me a call back at $800 and asked me if I would consider it, but I didn’t give him any satisfaction. I have not yet heard what they did, but don’t have any idea they took the action he expected. I think it more likely that they would give him a call. I received a letter

from Newel Haigler this week and was surprised to learn that he was at Lenoir College this year. I imagine he has developed into a handsome young man by this time. You ought to be here now to hear Carolus get off his comical speeches. He gets off some quite brilliant things sometimes. He doesn’t like for me to go down town when I don’t take him and puts up quite an argument against it. He says: “it’s so wet, so rainy, so nasty, so damp, father can’t go down town”. This morning after he drew his water he said the doll baby wants to draw his water, and he went and got it and brought it into the lavatory and held it over the proper place. But as it did nothing he felt around the doll baby and exclaimed “Doll baby has no penis, doll baby has no penis”. But I must close with love to all, 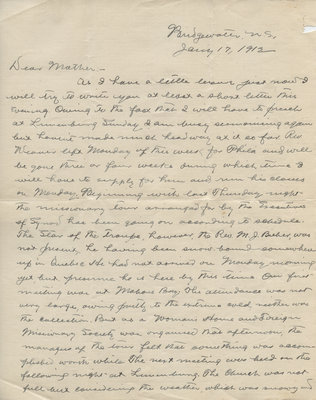