Creators
Carroll Herman Little, Correspondent
Candace Little
, Recipient
Media Type
Text
Item Type
Correspondence
Description
Handwritten letter from Carroll Herman Little to his mother on September 7, 1911. Little describes life with his wife Bonnie and their sons Carolus and Herman, and his work as a pastor in Nova Scotia. Includes information about his preparations to become housefather at the Bethany Orphans' Home.
Notes
Carroll Herman Little (1872-1958) was a Lutheran pastor, and a professor and administrator at the Evangelical Lutheran Seminary of Canada (later Waterloo Lutheran Seminary; now Martin Luther University College) in Waterloo, Ontario.

As we haven’t heard from you directly since you left and have received only one letter from Pearl, I don’t know whether you are at home yet or not, but will address you there at any rate. We were quite taken by surprise over the announcement of Blanche’s new baby and still more so by the reception of a lock of its hair. It must have been a wonderfully hairy baby – quite different from our bald headed boys. I infer from the colour of the hair that the little girl must be of the brunette style of beauty with the brown eyes and curly hair with which Bonnie is so enamoured. Perhaps we could make a trade with her and swap Herman for Herminie. I trust that both Blanche and the baby are continuing to do well. We are having fairly cool weather now and plenty of rain. Everything is so pretty and green. I wish it had been so when you were up here. You would then no doubt have thought much better of our country. Yesterday we all drove up to New Cornwall intending to put in the day visiting, but after dinner it began to rain, and as soon as there was a little lull in the storm we drove home having made only three calls. That is about the only part of the parish where I haven’t yet been around. Last Saturday I had the funeral of the young girl who was run over by the train. It was quite largely attended and was a very sad affair. The remains were in such a state that the casket was not opened at all. The funeral was set for 3 o’clock Saturday afternoon. I tried to have it

changed to 2 o’clock in order to take the 4 o’clock train to Chester; but they wouldn’t consent to it. In consequence I had to drive down to Chester. Bonnie at last consented to go that way and so we all went down and stopped at Capt. Moarb’s till Monday morning. I sent Bonnie and Herman back on the train, while Carolus and I drove through. We reached home by noon about 2 hours after Bonnie’s arrival. I administered the communion down there and baptized a baby, Mr. S[?] preaching for me up here. In the afternoon on Monday I had to go out into the country to baptize a sick baby, and on Tuesday occurred Mr. Abraham Ernst’s funeral. It was probably he largest funeral ever held at Mahone Bay. It is estimated that there were a thousand people present. I had had almost no time for preparation but acquitted myself creditable, so they say, and the service was very solemn and impressive. I preached from Hebrews 11:4 And by it (i.e. by faith) he, being dead yet speaketh”. All Mr. Ernst’s children were present but two married daughters one in western Canada and the other in Europe. Mr. Ernst willed his business to his four boys, who are to form a joint stock company with Arthur of Philadelphia at the head. Mrs. Ernst was given the home place and his life insurance amounting to 8000 and each of the girls were given $5000 apiece. Mrs. Ernst in addition will also come in for her dower, so that she will be very comfortably fixed. Arthur will move back to Mahone and he will more than fill Mr. Ernst’s place in Church matters as he is more up to date and more liberal than his father was. He is the best son Mr. Ernst had and is a thoroughly consecrated young man. His wife also is a good Church worker and a fine organist and will be a great help in the congregation

here. So that from the Church’s stand point Mr. Ernst’s death is not so serious a loss as it might have been. In putting Arthur at the helm he did a very wise thing. He also stipulated that Harvey, his youngest son, a sort of harum-skarum fellow, should share in the business equally with the other boys provided he stayed at home and worked, but that in case he did not do so, he should have only the interest on his share. This will probably make a man out of the young fellow, who has just attained his majority. He was over in the states when his father died.

They have no pastor in view here yet. Mr. Weaver is over in Pa. attending the General Council convention and looking around for a pastor for Mahone, but whether he will succeed in finding one, I do not know. Some think he will spend more energy in seeking out a place for himself, but I am doubtful if he will find one to his taste. We are to have and Orphans’ Home Board meeting on Tuesday next when I want to have certain things attended to previous to my moving into the Home. My tenure here is drawing to a close and we will soon have to begin packing, which I dread very much. I sent you a half dozen of our group pictures this morning. They are, I think, very good of us all. The half dozen is your share and you are at liberty to distribute them as you see fit, Pastor Behrens was here Tuesday and I turned over the Editorial department of the Nova Scotia Lutheran to him and he will begin writing the paper this month. I may discontinue your subscription, as you will probably not be so much interested in it hereafter and as it will cost me 60₵ a year after this. If you desire it however I will continue it. We are having lots of good apples now. I have had two ripe tomatoes out of my garden already. But the chances are that frost will catch the others. We had a slight frost a couple nights ago and will likely have one in the morning.

With love to all, I am Sincerely yours,

[Note on side of page] 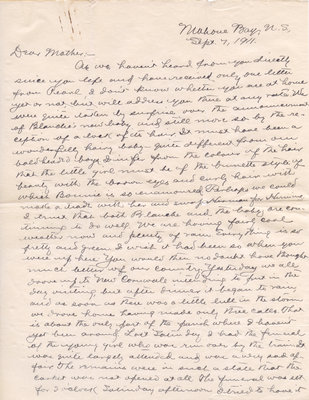